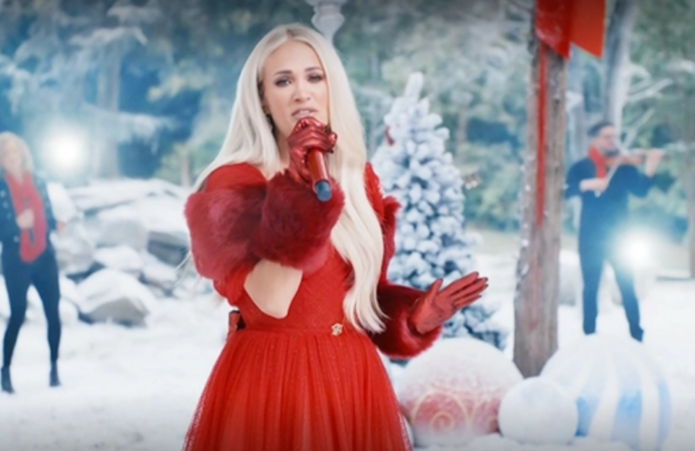 Carrie Underwood is completely prepared to celebrate the holidays.

She blessed her fans with a marvelous performance during the Macy’s Thanksgiving Day Parade. From a snow-covered set filled with holiday decorations, Carrie sang her hit holiday tune “Favorite Time of Year.”

She wore a red tulle dress for the performance and paired her dress with matching red gloves and red heels. It seems that Carrie underwood’s holiday style is on point!

Carrie has been hitting the stage constantly lately. The country singer performed her hit song “If I Didn’t Love You” with Jason Aldean at both the CMAs and the AMAs. For the AMAs, Carrie wowed in a black gown and showed off those incredible vocals. Jason sang along with Carrie and played the piano as well.

She is currently gearing up for her Las Vegas residency, which is her first-ever. She will be joining Katy Perry, Luke Bryan, and Celine Dion as the founding headliners at the Strip’s Resorts World Las Vegas.

Carrie Underwood stated that touring was one of her favorite things to do as a performer and she had been missing that a lot. She loved to be on the road and go to the fans, where they lived, and also do multiple shows in one place where people will be able to come to get that concert experience and have some fun in Las Vegas at the same time.

Carrie considered that to be a great honor to perform in a brand new theatre at an exciting destination like the Resorts World Las Vegas.

The singer recently spent some quality family time at Walt Disney World in Florida with her husband Mike Fisher and their kids.

How to Save For Your Next Car

Should You Observe this stock? Petroleo Brasileiro S.A. – Petrobras (PBR)

Petroleo Brasileiro S.A. - Petrobras (PBR) observed an average volume with 36296.83K shares and exchanged 369697 shares on hands in most recent...

PolyPid Ltd. (PYPD) observed an average volume with 87.14K shares and exchanged 6755142 shares on hands in most recent trading session. ...

Bed Bath & Beyond (BBBY) traded 7384332 shares on hands in most recent trading session and observed an average volume with...

Are You Looking For Active Stock? CNH Industrial N.V. (CNHI)