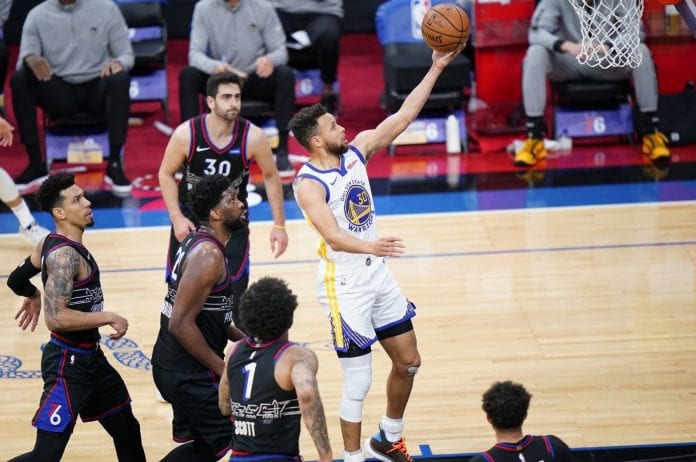 The ongoing shooting streak of Stephen Curry has been a source of wonder for everyone watching. Opponents, coaches, teammates – no one is an exception to the amazement as the player continues breaking records almost every game now.

How Higher Will Stephen Curry Go?

Stephen Curry’s latest achievement is scoring 49 points in the 107-96 victory against the 76ers on Monday. He scored 20 in just the final fourth quarter. As such, he is now the only player in the history of the NBA to have scored at least 30 points in 11 games consecutively while being at least 33 years old. Previously, the record was held by Kobe Bryant who had done the same in 10 consecutive games back in 2022, December.

Stever Kerr, the coach of the Warriors, said that he has seen Stephen Curry’s early career crazy streak as well as Michael Jordan’s amazing streaks. However, this is a different dimension altogether and is way beyond the player’s own standards.

Just a week earlier, Stephen Curry had gone past Wilt Chamberlain as the highest scorer for the Warriors. In the 12th season of his career, the pace at which he is breaking records is unprecedented. The player’s average points scored stands at 39.9, with 4.3 assists and 6.6 rebounds in just April. However, he still remembers not to lose the joy of the game in this history-altering streak.

Curry stated that he is completely aware of all the records being broken. However, it is very important to not put much pressure on himself and focus on just playing basketball. Of course, being aggressive is a significant part of it.

Currently, his ability to score 3-pointers is what is helping him to reach these unprecedented heights. His teammates admit that several times they simply stand and watch Stephen Curry and his special presence on the court.

“Woman In The Window” Review Is Out!

THE FIVE DRAFT PICKS TO WATCH

Drew Barrymore Unveils Why She Quit Drinking In 2019