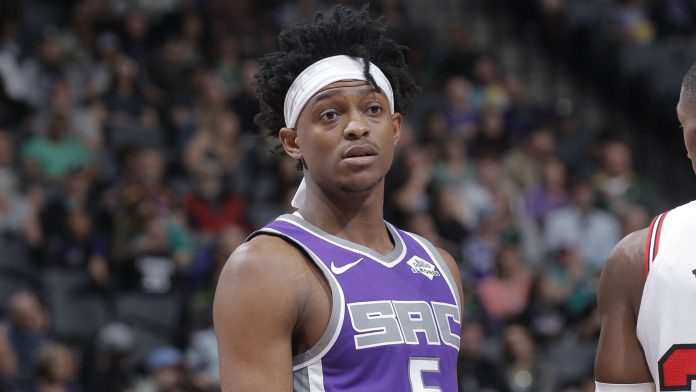 Trade rumors around Sacramento Kings guard De’Aaron Fox’s name say that he is being bandied about the league as a big-time star who might be dealt before the Feb. 10 NBA trade deadline.

The Philadelphia 76ers discussed a Fox-Ben Simmons deal package just a few days ago, but the conversation is still in the early stages, league sources told Yahoo Sports.

Trade Rumors HaveBeen Going On For A While

The trade rumors surrounding Ben Simmons and the Philadelphia 76ers haven’t stopped, and while the team isn’t willing to trade the Australian point guard for anything less than an All-Star, reports continue to circulate linking the team’s fifth seed in the Eastern Conference to several players across the league.

In recent days, Adrian Wojnarowski said that players like John Collins, Harrison Barnes, and Domantas Sabonis will not do the job for the Sixers, who want to get a better return for Simmons.

The Sacramento Kings were formerly thought to be a strong contender to sign Simmons, but that appears to have altered since the season began. Things may be different now, as the Sixers have allegedly discussed the prospect of a De’Aaron Fox-Ben Simmons trade.

According to Yahoo Sports’ Chris Haynes, Fox is attracting a lot of attention across the league, and the two organizations have talked about a potential trade, but nothing is confirmed at this time.

The Philadelphia 76ers discussed a Fox-Ben Simmons deal package just a few days ago, but the talks are still in the early stages, league sources told Yahoo Sports.

The Kings have gotten a lot of interest in Fox and second-year guard Tyrese Haliburton, but the internal strategy is to develop around those two backcourt mainstays rather than trade them, according to sources.

No player on the Kings’ roster, however, is considered untouchable. Sacramento is 17-27 and ranked 11th in the Western Conference.

Fox recently addressed the trade rumors, saying that the Kings are underperforming, which isn’t healthy for a club with high expectations like them. This predicament might pave the way for a blockbuster deal, putting the Sixers in a good position and allowing Simmons to get out of the awful situation he’s in in the City of Brotherly Love.

It remains to be seen whether the first discussions gain pace or whether the Sixers abandon this approach and continue to seek possibilities in the trade market.

Honduras Swears in first Female President: Xiomara Castro gets the assurance of US to...

US Agent: Origin And Journey Of The MCU Character