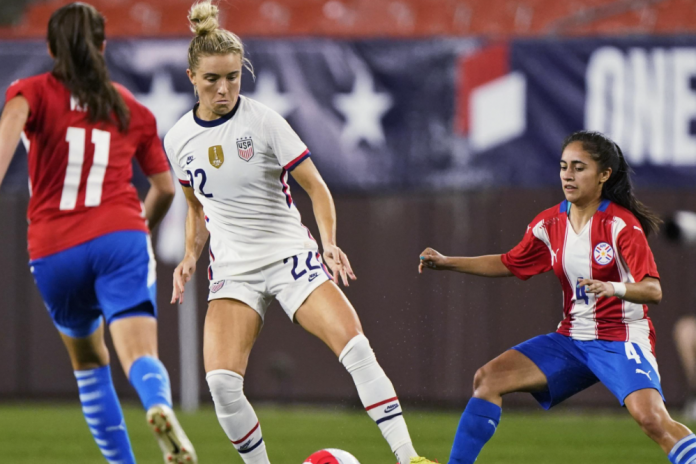 Carli Lloyd is not considering her retirement from the US women’s football team.

She hit a career-high in terms of goals in the US women’s national team’s 9-0 victory over Paraguay. The footballer has 3 more games to play before she walks away from the game.

Carli Wants To Stick With The US Team

She thinks about sticking around with the team, for a split second, but goes back to reality in just a minute.

Lloyd scored 2 in the first 5 minutes of the game and added 2 more to her tally before the first half ended. The United States had built a 6-0 lead over Paraguay by then. She added her 5th goal in the 61st minute.

Us coach Andonovski praised Lloyd by calling her a legend of the game. She was a threat on the field no matter the team they faced. The mentality that she portrayed was unmatched and she was just hungry for goals. It does not matter to her if she’s playing for medals or against another team, all she wants to do is to score more goals.

The scoring outburst for Lloyd was last seen at the 2015 WC final. She scored 3 in the first 15 minutes against Japanese opponents. She announced that she intended to retire after 4 games post-Olympics.

She stated that it was quite fun to play. All she is trying to do is to savor the moment and wants time to slow down. She has played one and has 3 more on the way to her retirement.

This was the first time Lloyd had scored 5 in a game. She has a total of 9 hattricks which is 1 less than Mia Hamm.

The was the first time the United States had faced Paraguay. They will meet again on Tuesday in Cincinnati. The USwnt team will host South Korea twice and might have a road trip to Australia.

Is the GOP worth saving? See Liz Cheney’s response