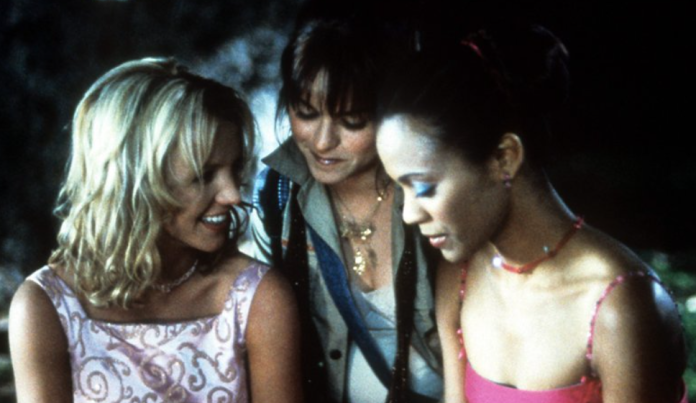 Zoe Saldana has fond memories with Britney Spears and Taryn Manning after they had hit the big screen with Crossroads.

The movie is now preparing to celebrate its 20th anniversary on February 15 and Zoe Saldana is looking back on the exciting experience.

“I was just so excited to be doing a movie like that about three friends,” Zoe exclusively shared with E! News. “I’m one of three sisters and we are best friends. Anything to do with female bonding, sisterhood…I’m consumed by emotion immediately. I get it. It’s easy for me. I yearn for it. I’m always looking for it.”

She also stated that it was quite thrilling to work with Shonda Rhimes on the project and that filming with Spears was a treat.

“I was working with Britney Spears when Britney was the biggest thing at that time,” she said. “And she was always just a sweet and kind person. She still is. I just have a feeling that she still is. I’m proud of her for stepping up for herself. It’s amazing.”

Crossroads portrayed a story of three childhood best friends who decided to take a road trip across the country with a guy they had just met. Along the way, the group found themselves building an even greater friendship.

Zoe Saldana Shared Her Past Experiences

“I was always encouraged by my mom that if you were curious about another woman, just ask advice and reach out,” Zoe shared. “You don’t have to create a competitive environment. There is enough…She’s so natural and also so down-to-earth, so approachable. I remember all those things.”

Britney was at the top of her game but Zoe Saldana was simply interested to learn more about her personality.

In between reminiscing about her acting career, Zoe also took time to celebrate a new year and her partnership with Corona Premier.

Starting this month, the actress will team up with Corona Premier to show fans how impactful small steps can be through the “Keepin’ it Cool with Zoe Saldana” content series. In this four-part series, fans can follow Zoe as she achieves more by doing less and instructs fans on how to “keep it cool after your cool down” with a Corona Premier.

While a Crossroads reunion isn’t currently planned for the year ahead, Zoe said she would be more than open to catching up with her road trip partners in the future.

“There’s been nothing but love between all three of us,” she said. “It would be beautiful to sit down and you know, just break bread with all those awesome women and reconnect because it was a good experience.”

NFG Receives “Hold” As The Average Recommendation By Brokerages

The Justice Department announced on Friday that FBI agents searched former US President Donald Trump's Florida home this week and removed 11 sets of...

Melissa Gorga will not be leaving. The Real Housewives of New Jersey actress addressed reports that she is quitting the long-running reality series on...

Even as Trump chooses to hide the contents of the Justice Department search warrant that was executed by the FBI and the list of...

Texas gubernatorial candidate Beto O’Rourke floored a heckler at a town hall. The troublemaker laughed even as he discussed the Uvalde school massacre. The...

The federal stimulus checks were a great learning experience for the administration as they both proved that immediate payments work wonders. But there is...