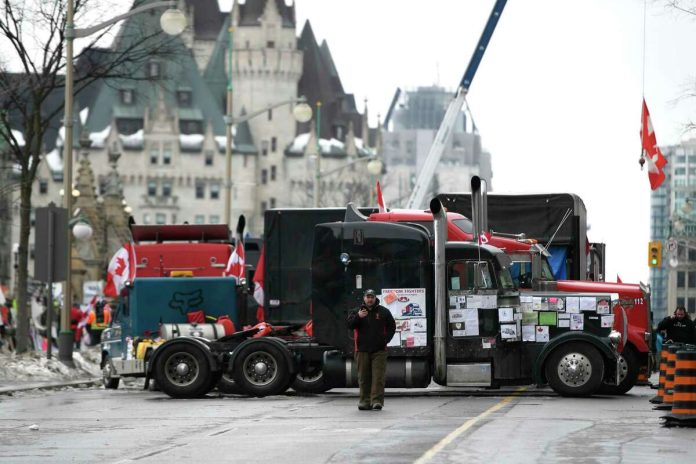 Protests in the US-Canada border that began as a fight for truckers’ rights have morphed into ad hoc anti-establishment uprisings that have blocked down vital trade routes, perplexed police, and raised fears that the movement may spread.

According to the Windsor-Essex Regional Chamber of Commerce, the rolling blockades had halted three US-Canada border crossings as of Thursday, including the vital Ambassador Bridge between Detroit and Windsor, which generates $13.5 million in economic activity every hour.

As a result, auto companies in the United States and Canada have cut output, and analysts have warned that if the unrest continues, it could deliver a devastating one-two punch to Canada’s recovery, stoking inflation and sapping growth.

The confrontation, which took place just hours from the protest’s core in Ottawa, is typical of how the movement has been nearly turned on its head. The Ambassador Bridge blockage used to be about preserving the rights of unvaccinated truckers and concerns that vaccination restrictions would exacerbate a supply-chain catastrophe; currently, it almost solely targets working truckers while upsetting the supply chain.

On Thursday, there were hints of softening tensions in Ottawa when several trucks left. The Conservative Party of Canada, whose present leaders had encouraged the protest, had changed direction and called for the blockades to be lifted. However, Prime Minister Justin Trudeau is faced with several difficult choices, as the demonstrators’ demands are broad and include his departure from office.

The demonstrations have lasted in Canada partly because police have been hesitant to make arrests and break the blockades, fearful of inciting violence. Police in Ottawa claim they will increase enforcement shortly, but there has been no evidence of this so far.

The convoy was sparked, from the start, by new border laws that went into effect in mid-January, forcing truckers crossing the US-Canada border to get vaccinated. However, it has subsequently become a rallying point for greater political opposition.

Andrew Cuomo Gets Away Despite Charges By 2 Women