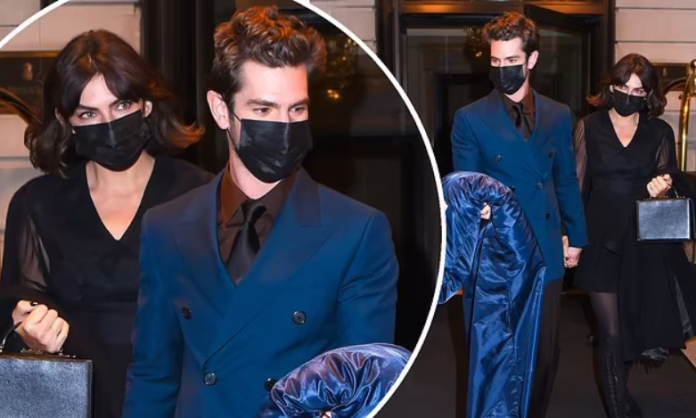 Andrew Garfield along with his girlfriend, Christine Gabel, was seen indulging in a sweet PDA on the streets of New York. The Spider-Man star and Christine, a medical student and model, were seen walking along SoHo holding hands.

Andrew was seen later with his beau of two years at The Late Show with Stephen Colbert post-release of Tick, Tick….Boom!, his new film. The start of The Amazing Spider-Man was striking in his orange slacks, a Patagonia royal blue puffer, and matching Gucci sneakers.

The lovebirds were deep in tête-à-tête as Christine strolled along in a tweed blazer, orange knit sweater, and bootcut jeans. After the afternoon stroll, Andrew Garfield prepared for a press event and the couple headed towards NBC for his appearance.

The actor was in navy slacks, dress shoes, matched with a button-down patterned dress to compliment the evening. Both were seen wearing a face mask.

Garfield’s latest film had a New York premiere and Christine was there for the show. Later, the duo was seen making their way to the Gerald Schoenfeld show from the Ritz Carlton. Though she attended the event she wasn’t there beside him walking the red carpet.

Andrew Garfield and Christine were 1st linked romantically in 2019 when they were first spotted walking arm-in-arm in Los Angeles.

Andrew Garfield had met her through friends. A source said that though the relationship was new, they were close to each other and it could go all the way.

Andrew Garfield had earlier dated Susie Abromeit for around a year. he also had a serious affair with his co-star Emma Stone between 2011 and 2015 before an amicable separation. Emma has since married Dave McCary, the segment director of Saturday Night Live, and is expecting their 1st child. In 2019, Andrew Garfield had a brief affair with Rita Ora.

Gloria Estefan Is “Sexually Happy” In Her Marriage