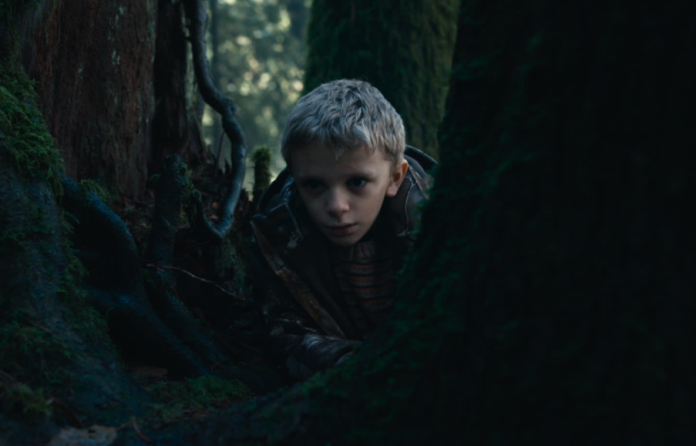 You have to give Scott Cooper his due; he is hard to pigeonhole. Starting with a musical (Crazy Heart), he moved to a suspense thriller (Out In The Furnace), then a Gangster flick (Black Mass) before moving on t a western (Hostiles). Antlers give him the horror that has been missing from his resume.

It is certainly an odd name for a horror movie. He has the help of horror flick veteran Guillermo del Toro for the company as a producer. And the result is a decent flick. It has its drawbacks, but Antlers surely stands as a decent offering from the talented director.

The name is taken from a native myth about a violent creature resembling a deer. The plot seems to crash-land after the initial minutes. But it does have the requisite spooking and moodiness that the genre demands.

Antlers Stay As A Competent Attempt At Horror From Cooper

It is just one character essaying the role of the obligatory bad spirit. So even though it doesn’t disappoint, it never really enthralls as it has too few plot elements.

Set in an economically depressed, remote Oregon town, it portrays middle-school teacher, Julia, back from California to live with her brother Paul, the local sheriff. Their relationship has an element of uneasiness that becomes clear only at the end.

The monster inhabiting Antlers and the following slaughter is gruesome enough to keep the audience riveted. But somehow the film ends up in a listless cycle of grotesque killings, minor discoveries, the haunted look of Lucas, matched by the worried Julia.

As with his other films, Antlers also starts with a great feeling of import. But that doesn’t translate to the storytelling. Here are again decaying people inhabiting a darker past.

Antlers again raises hopes initially, only to disappoint as the story develops. The strong craftsmanship and the solid premises give way to a loose structure. The lack of plot elements doesn’t make for a very enthralling watch in the end.