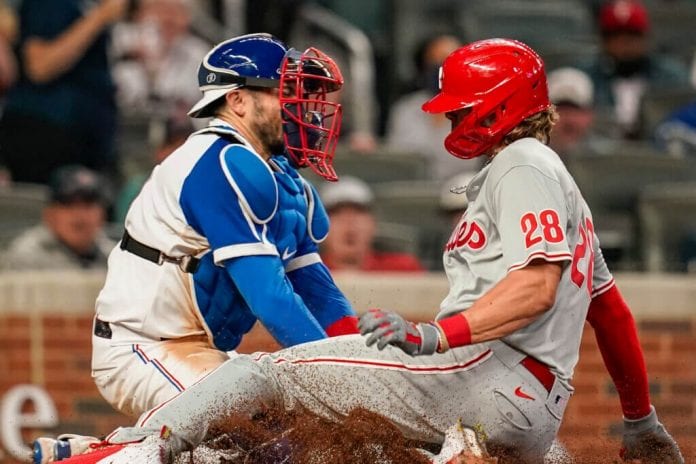 The Atlanta Braves lost a replay challenge controversially in their 6-7 loss against Philadelphia Phillies. The Braves lost out on their lead in the ninth innings over the replay.

The Defining Moment For The Atlanta Braves

Alec Bohm, the third baseman of the Phillies, slid home and scored the winning run as Travis d’Arnaud, the Braves catcher, tried to tag him out. Travis was moving from to the side of the first-base from the side of the third-base where Bohm ran in.

Lance Barrett, the plate umpire, called the runner safe. However, replays showed that Bohm did not possibly touch the base. The Atlanta Braves’ video challenge took a significant amount of time before the on-field decision was maintained.

Drew Smyly, the Atlanta Braves’ starter, said that it was an embarrassing decision on part of MLB when the replay clearly showed otherwise. He questioned the use of replays entirely after what happened. MLB’s official ruling explained that the replay umpire failed to definitively determine if Bohm had touched home base before the tag.

Mike Trout, Justin Turner, and other players all agreed that the ruling was a mistake and took to social media to voice their outcry. The ninth innings had begun with the score at 6-6. Bohm started off by hitting a double. Then Jean Segura grounded a ball towards second base to get Bohm to third base. Didi Gregorius sent a fly ball towards left field after that to get Bohm to home plate.

Bohm later only said that the umpire called him safe and that is everything that matters for him. Joe Girardi, the Phillies manager, explained that Bohm’s big toe hit the plate’s corner. However, the Atlanta Braves disagreed adamantly. After the lost challenge, fans of the Braves threw rubbish onto the field in protest which was strongly criticized by Dave Swanson of the Braves.

Billionaire offers a chance to win a SpaceX flight by donating to St. Jude’s...