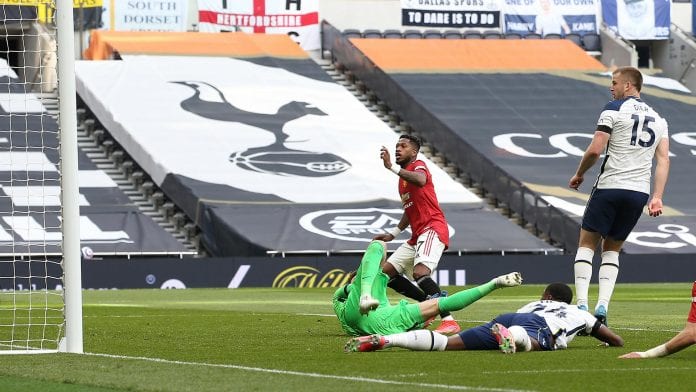 Man United was victorious against their away league game against Tottenham Hotspurs at Wembley on Sunday. The match was marred with controversial refereeing whose aftermath lasted even after the match ended.

For Tottenham, Son Heung-Min was the sole goal-scorer. However, his goal came after a goal from Man United’s Edinson Cavani had been disallowed on review by VAR. However, Spurs could not maintain the lead as Mason Greenwood, Cavani, and Fred all found the back of the net in the second half.

Man United and the team’s fans were left fuming at the 35-minute mark when their goal was disallowed. VAR reviewed that Scott McTominay had flicked his hand back to brush off a shirt grab from Son but had unintentionally nicked the South Korean’s face.

McTominay had already been booked once but he was not sent off for this tackle. However, Ole and his team were enraged that the goal was overturned over an unclear and vague foul. McTominay expressed his general dissatisfaction with VAR and was adamant that it was a mistake on the part of the referee. However, he said that the results at the end are all that matters.

Five minutes after the incident, Son broke the deadlock by scoring and tempers flared higher for Man United. Lucas Moura gave the final pass before Son beat Henderson in goal.

Come the latter half, the teams played with a different level of intensity. Both goalkeepers pulled out top drawer saves. However, Man United piled on relentless pressure. Fred equalized by turning in a rebound that was drawn by a 57 minute from Cavani.

In the 79th minute, Cavani scored again by heading a Mason Greenwood curling cross. This time the lead was not disallowed. Finally, Greenwood completed the victory by scoring a third deep in added time.

What are the possible impacts of online betting sites?

Is this stock is Attractive? Southwestern Energy Company (SWN)

Are You looking For Hot Stock? Marvell Technology, (MRVL)

VOLATILITY ANALYSIS: Volatility remained at 4.33% over last week and shows 4.29% volatility in last month. Market risk that established with...

You Need to Know this stock? Huntington Bancshares Incorporated (HBAN)

VOLATILITY ANALYSIS: Volatility remained at 3.04% over last week and shows 1.90% volatility in last month. Market risk that established with...