Jennifer Lopez and Ben Affleck have gone ahead and made their relationship official- at least on Instagram. This came on J-Lo’s 52nd birthday which saw the couple sharing a kiss on the singer’s Instagram with the actor’s arm wrapped around her. The picture was a part of the slideshow which celebrated the pop star’s birthday.

The rest of the slideshow was all about Jennifer Lopez, as the singer languished around a luxury yacht wearing a red string bikini that had an orange triangle pattern. Affleck, on his part, was decked out in a navy shirt with the sleeves rolled up.

Ben Affleck And J-Lo Are back!

Jennifer Lopez had also posted a video of herself posing on the yacht with pink sunglasses which complimented her pink wedge heels. The reunited couple got official on Instagram, which came slightly after their unofficial one- which was a joint appearance on the birthday party of Leah Remini. Though Ben Affleck and Jennifer Lopez have both been seen multiple times through Los Angeles over the last few months- which includes a weekend in the Hamptons for the 4th of July.

Ben Affleck and Jennifer Lopez were previously engaged all the way back in 2002, and have gotten quite close this time around too. They have also been spotted enjoying time with each other’s children at the Universal Studios Hollywood. Interestingly, reports from the media have claimed that both the couple are madly in love- which Lopez thinks is a second chance for the couple.

Sources close to Jennifer Lopez and Ben Affleck have stated that the couple is doing everything they can to ensure that they make this relationship work. Although the pop star was affected quite badly by the previous split, the couple wants to put the past behind them and make sure the future is brighter.

A Historic First At Coca-Cola 600 With Kyle Larson Win

Only Murders In The Building: Good Neighbors Made By True Crime

RLX Technology (RLX) exchanged 10420626 shares on hands in most recent trading session and observed an average volume with 11221.29K shares....

Uber Technologies, (UBER) observed an average volume with 21032.06K shares and exchanged 4580119 shares on hands in most recent trading session....

Advanced Micro Devices, (AMD) exchanged 11042602 shares on hands in most recent trading session and observed an average volume with 60947.21K... 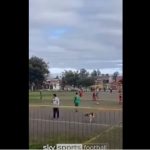 Dog scores after heading in from a set-piece! #Shorts

A very good boy sneaks in behind the defence to nod home from a free kick... 🐶

You Need to Know this stock? The Coca-Cola Company (KO)

The Coca-Cola Company (KO) traded 4626455 shares on hands in most recent trading session and observed an average volume with 12491.97K shares....