The first Biden Press Conference, which was the first presidential conference of Joe Biden since he took over the office, was held this Thursday. The conference went on to a stretch of over 120 minutes. The president went on to answer almost 24 questions. Most of the questions were based on the subject of the filibuster rule of the US Senate and the immigration policies.

As per the answers recorded in the Biden Press Conference, there were no such concrete solutions given by the president. When it came to the subject of immigrants, it was stated that the president is very much committed to solving the border issue. However, he added that he is not properly equipped due to the rule of the filibuster. The President stated that he does not have enough votes.

No questions were asked about the crisis of the coronavirus pandemic. This is one of the main issues that the country is going through currently. The country faced a major loss of life as well as economic loss. Even today, an average of a thousand lives are affected by the pandemic.

It is a very disappointing fact that the first-ever Biden press conference missed the question of the health crisis of the public. A subject that has taken over the world. And also, because combating the crisis, was one of the major themes of the campaign of the American president.

Superdome Catches In Fire In New Orleans, Only One Injured With Burns

Just the name of Judy Garland conjures a picture of the innocent pig-tailed child from The Wizard of OZ, Dorothy Gale, whose 'troubles melt... 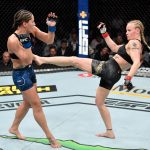 Valentina Shevchenko was stretched to her limits at UFC 275, but she emerged victorious in a hard-fought fight with Taila Santos. Through all five rounds,...