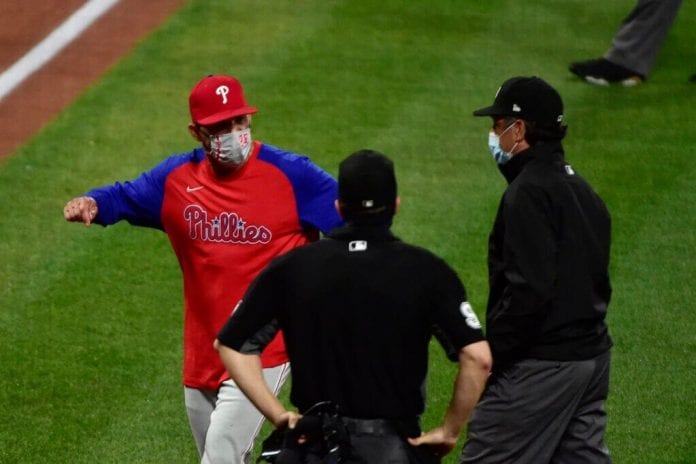 Bryce Harper, the slugger for the Phillies, had to leave the team’s match on Wednesday night in the sixth after taking a fastball at 96.9 mph from Genesis Cabrera. The Phillies won out 5-3 over the Cardinals.

The pitch hit Bryce Harper on the cheek. He walked off the field on his own, but blood was visible. On being taken to the hospital, fortunately, all scans showed Harper as being fine. He even posted on the internet after the match ended.

When Cabrera had entered the match, the score was at 3 runs to each side, in the sixth. After hitting Bryce Harper, Didi Gregorius was hit in his ribs in the very next pitch. Cabrera apparently had no intention of hitting either of them and was visibly upset. His pitches had been unfortunately extremely wild.

However, Chris Segal, the umpire on home plate, believed that the pitches had intent from Cabrera. Both benches had warnings issued. This resulted in Joe Girardi furiously storming out of the dugout of the Phillies before being escorted out by Segal.

Girardi angrily retorted that Cabrera should face this treatment and the umpire too. He even shouted at the pitcher before leaving the field.

The Phillies, though, made full use of the situation and went into the lead as Andrew McCutchen scored a hit. In the next inning, Gregorius’ sacrifice fly took the score to 5-3 in favor of the Phillies. In the previous inning, the fifth, Brad Miller had got the scores level by scoring a two-run home run. In the first four and third innings, the Phillies had conceded three runs through Vince Velasquez.

However, the bullpen of the Phillies performed outstandingly and delivered 4 and two-thirds innings that were scoreless, before Sam Conrood did not concede a single run in the penultimate inning.