The House passed a vital bill that will make it possible for veterans exposed to open air burn pits during the Iraq and Afghanistan wars to access medical care. The Burn Pit Legislation is the most far-reaching measure by the government that recognizes the fact that such sites led to health issues for the exposed veterans.

The Burn Pit Legislation would immediately and effectively assume that any service person who was exposed to trash pit burns in the least 32 years was exposed to lethal substances.

Denis McDonough of the Dept. of Vet Affairs said that the move was akin to the Agent Orange Act that gave wider access to Vietnam vets who were unprotected from the toxic substance used as a herbicide that endangered successive generations of people in Vietnam, Laos, and Cambodia.

The Burn Pit Legislation Was Passed 342 To 88

It is expected to quickly pass through and move to the President for his signature. President Biden’s son, an Iraq war vet, died of cancer from suspected exposure.

President Biden has for long advocated additional specialized care for people exposed to burn pits. He maintained that the toxic materials that were burnt in these pits caused the brain cancer that eventually killed Beau Biden, his son who was an Iraq veteran.

These pits were routinely used during the Iraq and Afghanistan wars where waste was disposed of using jet fuel. Exposure to these pits has caused an outbreak of Bronchial asthma, sleep apnea, allergic rhinitis, sinusitis, bronchitis, and even cancer among veterans.

Jimmy Butler Has A Message For Game 7 MVP Jayson Tatum 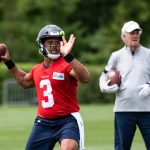