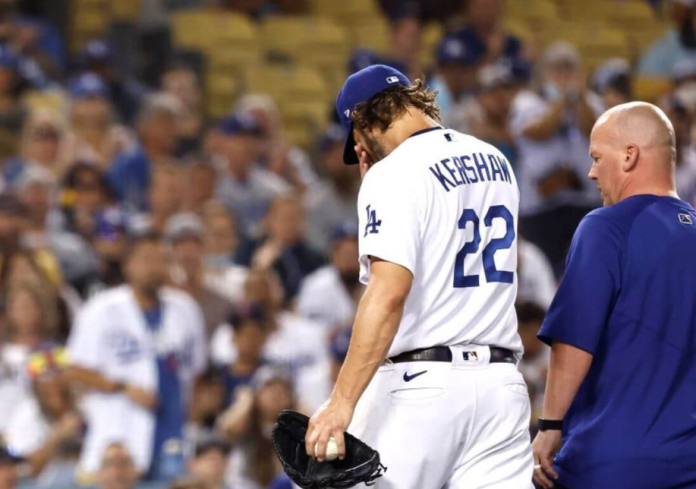 LA manager Dave Roberts saw how Clayton Kershaw was struggling when he was going through the Brewers lineup. The situation was worse than what he anticipated as it was a recurrence of the forearm inflammation that had kept Clayton Kershaw out for a long period of time. It forced a sudden end near the top of the second inning.

The playoffs are coming up and Clayton Kershaw might be ending his season. His contract is also ending so it is fair to think that his illustrious Dodgers career might be over.

Kershaw called this a tough blow while he was still in his uniform after the Dodgers won the game 8-6.

He stated that the injury got so bad that he had to stop going on. He will get it looked at again in the coming days as he has not wrapped his head around it yet.

He added that he wanted to be a part of this team till October as he felt that it was special. He knew that the team would reproduce something special and Clayton Kershaw wanted a part in that action.

He feels that this is the hardest part as he feels that his chances are quite bleak to play through October.

Clayton Kershaw, 33, spent 10 weeks rehabbing from inflammation around his elbow, an ailment that began before the All-Star break. He tried to return too quickly at the onset, forcing him to restart the rehab process methodically. Throughout, as the team rallied behind the acquisition of Max Scherzer, Kershaw expressed eagerness to contribute to a team on the precipice of greatness.

Why Having A wrist Watch is Wise As Science Dictates

On The Record: A Former Biden Staffer’s Sexual Assault Allegation

This city is voting whether to replace its police department

Ryan Crouser Has Won Another Gold At The Olympics

Last Monday saw the White House announce that almost 95% of the federal workforce was in compliance with the Federal Workforce Vaccination Mandate. Jeff...

The current reports on Wendy Williams seem to be spilling more bad news, as the condition of the famous talk show host seems to...

The White House has recently confirmed that Biden 2024 will definitely be a possibility as Biden intends to run for a second term. This...

Sean Parnell Has Suspended His Candidacy

Disgraced Republican Sean Parnell, who had been previously endorsed by Donald Trump recently announced that he would be suspending his candidacy. This news came...

Last Monday saw President Biden implied that he would nominate Jerome Powell to keep serving as the chairman of the Federal Reserve. This would...