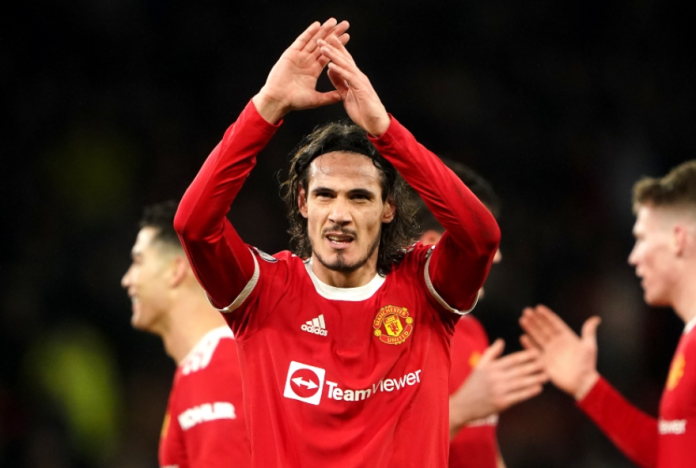 Edison Cavani showed that allegations of being a ‘mood-killer’ leveled against him were unfounded after his brilliant run against West Ham led to the injury-time winner.

The mercurial Uruguayan is months away from the end of his present contract, and he will be a free agent as the season ends. He can now freely discuss pre-contract arrangements with foreign clubs. There have been rumors that he could be moving to Barcelona.

MU’s stop-gap manager Ralf Rangnick forcefully asserted that Edinson Cavani remains central to the team plans and scotched rumors that he would be allowed to go at the end of the season.

Rangnick said that he had a series of conversations with Edinson Cavani in the past few weeks, adding that he had the most interaction with him.

Rangnick said he had conveyed to Edinson Cavani that he remains the most important player in the team’s plans and was the only striker who could play both face and back to the goal.

He was all praises for Edinson Cavani’s work ethic, his professionalism, and stressed that he would very much want that he stays at Manchester United for the complete season, and Cavani realizes that.

Speculation Continues That Edinson Cavani Could Move On

Despite Rangnick’s forceful assertion, rumors continue to swirl that Cavani remains one of the 3 troublemakers in the dressing room, an allegation leveled by BILD, the German publication. The unfounded report claimed that Paul Pogba, Edinson Cavani, and Anthony Martial rallied against the interim manager and were unwilling to go along with him.

But it was the brilliant buildup by Martial and Cavani in the dying seconds of the match that finally secured the team the vital points needed to secure a place in the Champions League.

Coronavirus Antibody Testing A Big Deal? What To Know About The Promising Serology Tests