Home Top Stories Elijah Wood Designed An Orc In The Lord Of The Rings That... 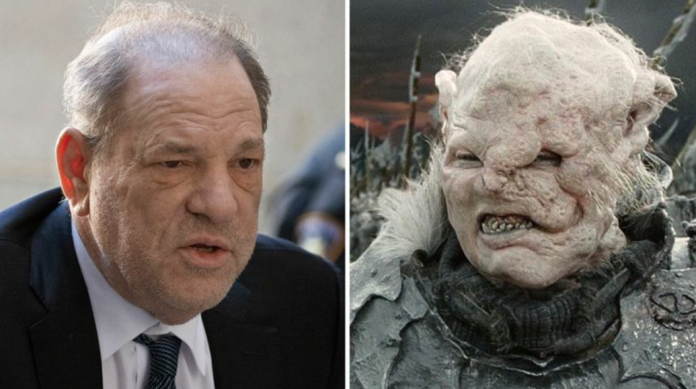 Elijah Wood talked about filming The Lord Of The Rings and how it changed his career. He admitted that one of the orcs was designed to look like Harvey Weinstein.

Elijah Wood revealed that this story was brought up on the Friendship Onion podcast. This podcast was run by Billy Boyd and Dominic Monaghan, who were hobbits in the famous trilogy.

Elijah Wood talked about seeing the orc masks for the first time. He clearly remembers that one of the orc masks was designed to look like Harvey Weinstein to screw up with him.

He thinks that this was the right time to talk about it as he was incarcerated.

LOTR fans are aware of the facts that concern the movie. The films were supposed to be developed under Miramax and Weinstein. Weinstein tried to pressure Jackson to make just one film from Tolkien’s book to which the director blatantly rejected.

The relationship between these two people became worse and eventually, Jackson managed to pitch his film to other studios under a tighter time frame.

Elijah Wood added that the window of time was quite intense as they had to shop it around town. Most people balked at the idea of doing more than one film. Wood explained that these people wanted to see how the first movie ran and then only would they invest the rest of their money.

The film finally landed at New Line Cinema where Bob Shaye agreed to the three movies to film at the same time.

Meghan Markle and Prince Harry’s Desire To Meet The Queen.

You Need to See this stock? Bank of America Corporation (BAC)

Bank of America Corporation (BAC) disclosed a change of -0.09% and its listed share value at $44.49 in the recent trade transaction....

VOLATILITY ANALYSIS: Volatility remained at 8.97% over last week and shows 10.25% volatility in last month. VOLATILITY is also measured by...