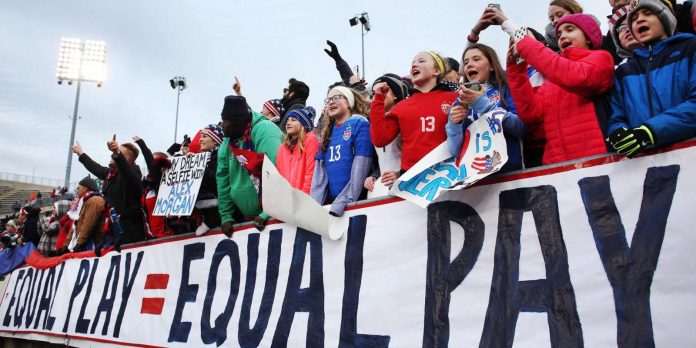 The United States Soccer Federation achieved historic accords for Equal Pay for both its men’s and women’s teams similarly, making it the first national governing body in the sport to do so.

The federation announced different Equal Pay union contracts with the organizations for both national sides on Wednesday, bringing an end to years of often bitter discussions.

The arrangement might still benefit Morgan and Rapinoe, even if the next Women’s World Cup is in 2023 and the team’s makeup will have altered by then.

FIFA has boosted the overall prize money for the 2022 men’s World Cup to USD 440 million, while its president, Gianni Infantino, has requested that FIFA double the prize money for the 2023 Women’s World Cup to USD 60 million, with FIFA increasing the number of teams to 32. For the present World Cup cycles, the USSF will pool FIFA funds, deduct 10%, and divide the remaining cash evenly among the 46 and 23 players on each team’s roster. Before the Equal Pay split, the USSF‘s cut climbs to 20% for the 2026-2027 cycle.

The men qualified for this year’s World Cup in Qatar, which begins in November, after missing the 2018 World Cup. The women’s squad will attempt to qualify for the 2023 World Cup, which will be held jointly by Australia and New Zealand.