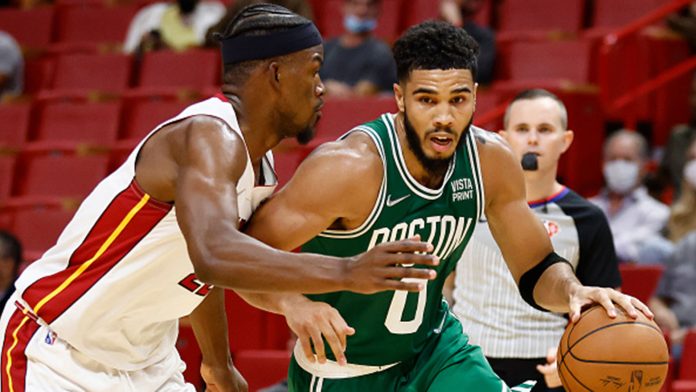 At halftime of Game 1 of the EC playoffs on Tuesday night, the Boston Celtics were in command.

But then came quarter 3. Miami would be on its way to a 118-107 victory against the Celtics after besting them 39-14 and using their toughness to put Boston into a slow decline of misplays and turnovers in the first game of this best-of-seven series.

Herro was called on a 3-point attempt early in the fourth quarter and sank all 3 free throws to extend the advantage to 96-76.

The Celtics Had Dominated Their Opponent In Q1 and Q2

When the Celtics announced that Smart and Horford would not be playing in Game 1, some of the plans that both teams had for the game were thrown off. Because of a mid-foot injury, he sustained in Game 7 of the East playoffs against Milwaukee on Sunday, Smart’s absence was expected.

Horford’s absence, on the other hand, was unexpected. He entered the team’s health and safety protocols on Tuesday afternoon, ruling him out of Game 1 and perhaps keeping him out for several games in the future. Boston had a chance even without two starters.

The greatest lead Boston had was 13 points. The Celtics are currently 46-7 this season when leading by at least that many points. Boston scored 18 points in the first half’s first 6 1/2 minutes, then two points in the second half’s first 6 1/2 minutes. In the first two quarters, the Celtics trailed for only 16 seconds. Boston has lost 17 of their last 26 Eastern Conference finals games.

Goran Dragic, a former Miami guard, was in attendance. This is the 50th postseason series in Heat history. In Game 1, they’re already 28-22. Butler’s 15th score, a free throw 16 seconds into the second half, brought his career total over 14,000 points, which includes playoffs. He’s the 220th NBA player with that many points. Miami’s first seven shots were all missed. Tucker took a break in the second quarter to have his right ankle re-taped before returning for the second half.

Aaron Carter Going To Rehab To Regain Custody Of Prince, 9 Months: He Said...