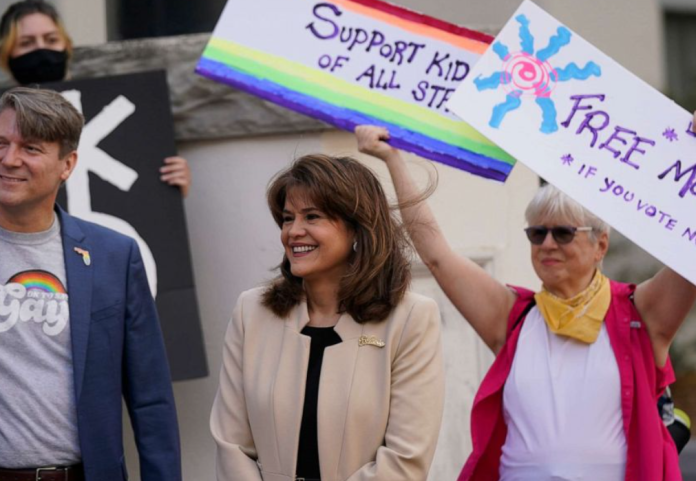 Florida students staged a school walkout in protest against the ‘Don’t Say Gay’ bill. This bill has passed legislation and would become effective once signed by Governor Santis.

The Don’t Say Gay bill would prohibit discussion on gender identity and sexual orientation in the primary schools of the state. Supporters of the bill, officially dubbed the Parents Education Rights bill, maintained that the bill could give parents greater choice over their children’s learning at school. They believe that LGBTQ matters are inappropriate for schools.

Students reacted strongly and marched out of schools with rain back picket signs, shouting ‘We Say Gay!’

The walkouts were staged throughout Florida in Tallahassee, Tampa, Orlando and various other cities as the student community rejected the bill outright.

Jack Petocz, the organizer of the statewide protests said that the support for the bill plus the rhetoric surrounding it exposed the true intent of the bill, which was to hurt people like him. Petocz organized the whole protests over social media, leading his school in protest at Palm Coast.

Petocz was summoned to the office of the principal of his school and ‘indefinitely’ suspended. His crime was distributing 200 flags at the protest rally despite being advised against it by his principal.

Petocz said that attempts to intimidate him and remove him from campus smacked of bigotry and homophobia. He said that silencing a gay student for his beliefs and rights and penalizing him for standing up to authority over the issuance of ‘Don’t Say Gay’ protest flags was ridiculous.

He said that the school authorities were merely upset at him for organizing the Don’t Say Gay protests, and merely used this minor issue to have him removed from campus. Flagler Palm Coast High School refused to comment on the issue.

$10M In Stimulus Checks For Residents Of Utah: Part Of Rental Assistance Funds

Olivia Wilde Has Won Her Custody Battle Against Her Ex

Jason Sudeikis lost the custody dispute Olivia Wilde had with him. The actor and director of "Don't Worry Darling" won a legal battle in California...

Tom Brady Shown Personal Reasons For His Absence From Practice

Tom Brady, the quarterback for the Tampa Bay Buccaneers, skipped practising on Thursday due to personal obligations. According to head coach Todd Bowles, Brady...