Home Top Stories Gus Edwards And Marcus Peters Will Be Missed By The Raven Due... 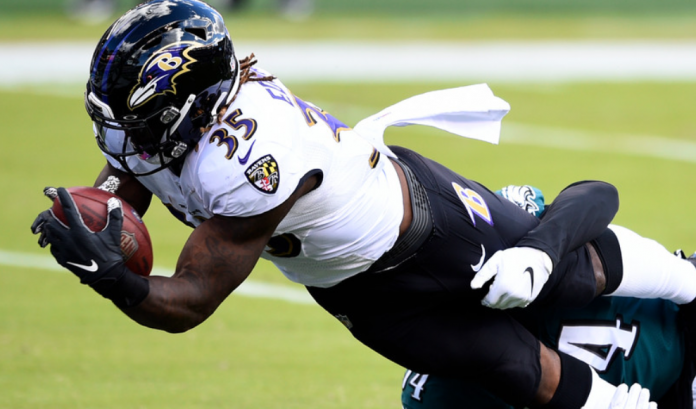 The Ravens are experiencing a horrible run of injuries which kept continuing after Gus Edwards and Marcus Peters were ruled out. Both these players were ruled out because of season-ending injuries especially torn ACLs in the practice sessions.

Peters was the first one to go down with a knee injury. Gus Edwards was injured after a few rounds. The coach had to call an end to the practice session. The current coach is John Harbaugh.

The season is opening after a few days and Baltimore was avoiding practice in proper equipment.

Gus Edwards was the 3rd Ravens running-back who suffered a season-ending injury. This came 12 days after JK Dobbins tore his own ACL in the preseason finale on the 28th of August. Justice Hill had hurt his Achilles tendon on the 2nd of September.

After Gus Edwards was ruled out injured, TySon Williams became the Ravens lead back, who does not have an NFL carry. The 2 other RBs in practice are LeVeon Bell and Trenton Cannon. They started their practice session on Wednesday.

The Ravens are signing free-agent RB Devonta Freeman to their squad, which was reported by his agent, Drew Rosenhaus. It is expected that Freeman will be promoted to the active roster.

The Ravens’ QB Lamar Jackson and WR Marquise Brown took to Twitter to wish the best for their injured teammates, Gus Edwards and Marcus Peters.

Dobbins and Gus Edwards had totaled 1,528 yards rushing the last season and accounted for 81% of the output by the Baltimore RBs. Edwards signed a three-year, $12.38 million deal in June that included $8 million in guaranteed money.

A female crew member has died and another injured following an accident involving a prop firearm on the New Mexico set of the film...

Selena’s new hulu show, Only Murders In The Building dropped the season finale TODAY, so of course, our girl Selly took to her socials...

Avlon: What does Sen. Sinema want other than attention?