Tottenham Hotspurs proved that they are a force to be reckoned with regardless of the presence of Harry Kane. They recorded a 1-0 victory over Manchester City in the sides’ opening game for this season. Man City are the current reigning champions of the Premier League.

Harry Kane Is Intent On Leaving

Reports claimed that on Monday, Harry Kane returned to training by himself. The talismanic striker of Tottenham Hotspurs is set to be undergo training with the team later on in the week. Nevertheless, Manchester City is not giving up their chase of Harry Kane. In the match on Sunday, all attention was on him even if he did not play.

His current contract with Spurs lasts for three more years. Spurs are also asking for a hefty price tag of over £150Mn for the England striker. Such a high price tag is an obvious way of Spurs voicing their intent to not part ways with Kane. At least in public, City has claimed that they have no intention of meeting the price.

However, ESPN reports that Etihad might be willing to spend £120Mn along with add-ons to get Harry Kane’s signature. However, Spurs has offered little encouragement in regards to such an offer being accepted.

If the offer does come through, Manchester City will break the British record in transfer fee for the 2nd time this window. They broke it the first time by acquiring Aston Villa’s Jack Grealish for £100Mn. It was also the first British player to have a £100Mn price tag.

It is uncertain where Harry Kane’s future lies. Nuno Espirito Santo, the new manager of Tottenham Hotspurs, explained that Harry was one of the players who joined them later. The others being Cristian Romero and Bryan Gill. They are other players who are leaving Spurs soon.

CEO writes a letter to President Biden proposing paying women for their work as... 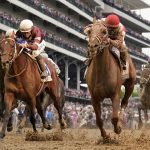