Home Politics Hillary Clinton On Democracy In the US

Hillary Clinton, the former secretary of state of the United States of America, gave a statement on the current position of the country with regard to the subject of democracy. She stated that there was a serious ongoing battle against democracy in the country as of now. And according to her, the reason behind that was the supporters of Donald Trump, the former President of the United States of America.

The Democratic politician, Hillary Clinton, went live on the show of one of the news channels. She gave her statement with regard to the topic of the democracy of the United States of America going through the twilight of democracy. She did not agree with this statement. However, she admitted the fact that the future of the country when it came to the subject of democracy was not stable.

Hillary Clinton, the former presidential candidate. She was at her apartment that is situated in New York City when she spoke on the matter. The Democratic politician also gave her views on the infrastructure bill that was introduced by Joe Biden, the President of the country belonging to the Democratic Party. She stated that she was sure of the fact that a majority of the politicians would support the policy which was aimed at supporting the families of the country.

Hillary Clinton talked about a number of legislations that were introduced by a number of states in the country. A lot of these legislations were introduced by the states in which the Republican Party was in power. In some states, ballot access was restricted to the citizens. She further talked about the election results during her time against Donald Trump, the former President of the country.

Buffalo Bills Vs The Chicago Bears: Match Highlights And Observations!

With Apple Pitching A Car Deal, The Kia Stocks Have Soared 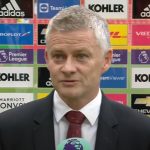 “It was offside!” | Ole Gunnar Solskjær reacts to Villa victory over United, and...

Nikola Corporation (NKLA) disclosed a change of 2.28% and its listed share value at $11.66 in the recent trade transaction. This company...

United Airlines Holdings, (UAL) exchanged 12183724 shares on hands in most recent trading session and observed an average volume with 11794.28K...