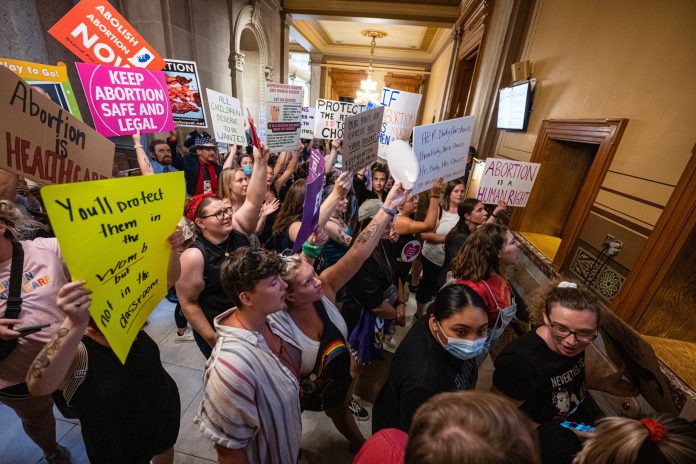 Lawmakers in Indiana have supported the first state-back ban on abortion since the Supreme Court ruling on Roe v. Wade. The almost virtual ban came amidst strong protests from women’s rights and legal groups. The issue was put to vote after a heated debate on whether incest and rape also were within the ambit of a ban on abortion.

The move came as a shock for residents of Indiana to see the move take away a law that virtually protects women’s rights on whether to have a child. The vote for the ban was won by 26 votes to 20. The bill will now be considered in the Indiana House, also controlled by the Republicans. The bill will become effective next month if it goes through the House.

Even Indiana Republicans were at odds on the contentious issue with Senators Veneta Becker and Kyle Walker against the bill which they said was repressive. Michael Young voted for the ban though he said the law was not inclusive and missed many points.

The legislation will ban abortions right from the fertilization of the egg. The only exception allowed is in the case of rape, incest, and if the mother is medically at risk. Abortion will also be allowed only within the initial 12 weeks of pregnancy for girls below 15 and within 8 weeks for others.

At present, the state law allows abortion up to 20 weeks after an egg fertilizes in the uterus. The Democrats strongly protested the move and said the law was against all women in Indiana. Senator Jean Breaux called it ferocious and said he felt ashamed that such a bill could get support in the state. An online poll revealed that over 75% of Indiana residents were against an abortion ban and wanted it made legal.

Avalance (AVAX) Rally On The Cards Based On DeFi Footprint Despite 30% Loss This...