On Sunday, the Premier League match between Liverpool and Manchester United was postponed. The reason being United fans breaking into the pitch on Old Trafford. Currently, there has been massive outrage against the Glazers, who own the team.

An official Manchester United statement confirmed the situation to be true. Furthermore, the decision to postpone the match was taken considering security and safety. They claimed to have taken the decision after consulting the police, the league authorities as well as the council of the locality. As such, the new date has not been announced yet.

The statement continued and acknowledged the passion of the Manchester United fans. As such, the officials support the fundamental right of the supporters to protest peacefully. However, they showed regret for the disruption that happened. They also showed gratitude to the officials for the support and investigations.

The EPL also issued an official statement supporting the words of the club.

The protest began when about a thousand fans gathered in front of the Lowry Hotel. The club’s team was staying there at the moment. Meanwhile, a couple of police vans were stationed at Old Trafford’s gates from early morning on Sunday.

The protest was peaceful and planned. However, chaos ensued when fans managed to infiltrate the stadium. After gathering at about noon BST, a substantial group managed to break the fence surrounding the stadium. The Munich Tunnel and the outside ground were all taken over by the fans. Gold and green flares were seen which were Newton Heath’s colors, the original name of Manchester United.

Police subsequently took positions in an attempt to clear out the area in front of the stadium. However, there were a few isolated incidents where barriers and bottles were thrown. Liverpool later on also gave an official statement stating their agreement with the taken decision.

3 US-Canada Border Crossings Have Been Blocked By Protesting Truckers

John Cornyn Scorned for Asking If Biden Is Really In-Charge

The closing summer listening of the Jan. 6 committee will be led by Reps. Elaine Luria and Adam Kinzinger, who represent different political parties...

Sen. Josh Hawley's surprise appearance during the committee hearing on Thursday, January 6, was a big hit on Twitter. The committee displayed the now-famous...

Kyler Murray and the Arizona Cardinals' summer tension ended on Thursday when the quarterback agreed to a substantial contract deal, making him one of... 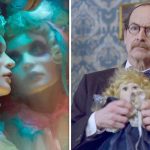 Although creepy killer dolls are a staple of the horror genre, there is a more uncommon and unsettling subgenre where real humans are brainwashed...