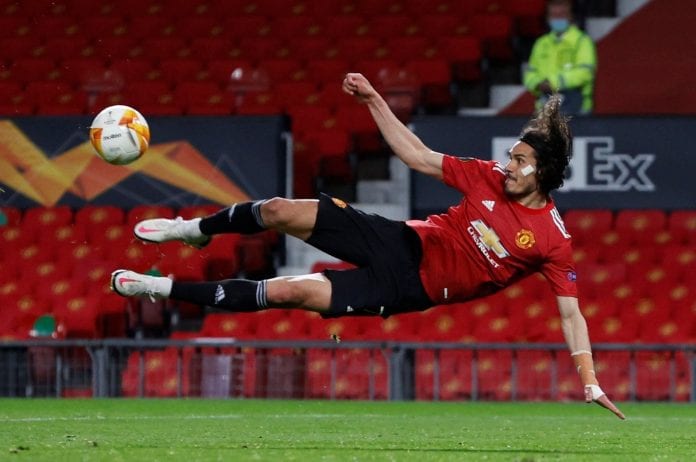 English footballing giants, Manchester United, decimated their opponents at least on the score-line in their Europa League semi-final match against AS Roma. The match took place at Old Trafford on Thursday.

A Huge Advantage For Manchester United

The first ten minutes went in the favor of Manchester United as midfielder Bruno Fernandes opened the scoring by sweeping home an excellent lay-off by Edinson Cavani. However, the lead did not remain intact before the half ended.

Roma was gifted a penalty when Paul Pogba inadvertently touched the ball in his penalty box while defending a cross. Lorenzo Pellegrini converted it successfully. Before the half was over, Pellegrini also assisted Edin Dzeko in scoring the goal to put Roma in front. The former striker for Manchester City has scored six times in the five times he played at Old Trafford.

However, Manchester United had other plans for the match. As the teams emerged from the tunnel, Cavani equalized with an excellent first-time shot. He then scored his second and the team’s third after tapping in a parried Aaron Wan-Bissaka shot.

Ole Gunnar Solskjaer’s team had no intention to let go of the advantage. The fourth goal came from a penalty, however. Chris Smalling had innocuously tackled Cavani to the ground which Fernandes converted with the calm demeanor that is expected of him.

Pogba then made up for his mistake in his half by powering home a header at the end of a sublime cross by Bruno. Mason Greenwood completed the rout after he latched on to a pass by Cavani and smashed the ball past the keeper and into the net.

Manchester United is now the first team to have scored at least six in one of Europe’s major tournament semi-finals since 1964 when Real Madrid did the same in the European Cup. As such, the English side might be finally over their inability to get past the semi-finals under Solskjaer.

AR Stock Expected To Report $0.03 As Earnings Per Share

Germany could issue thousands of people coronavirus ‘immunity certificates’ so they can leave the...

Ellen DeGeneres, the popular host from the American talk show, The Ellen DeGeneres show, gave an announcement about ending the show forever. So the...

Caleb Kennedy, one of the contestants of the singing competition, American Idol, is out of the show. As per the sources, it was stated...

FOXA Will Be Putting Up An EPS Of $0.64 For This Quarter

Several analysts have already predicted that the stocks of FOXA will be putting up an EPS of $0.64 for this quarter. Around three investment...