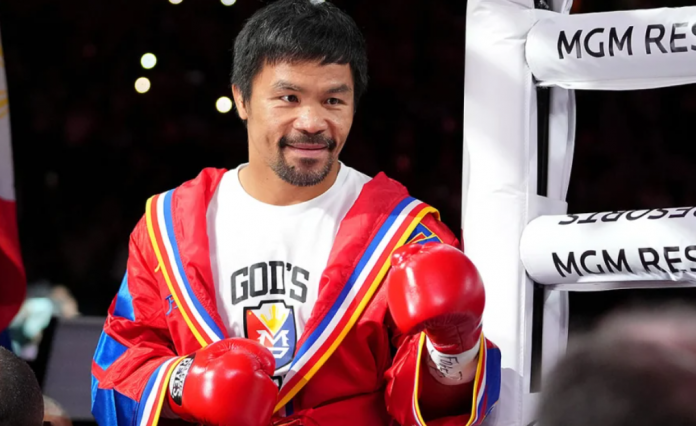 Manny Pacquiao completed his career with a loss to Yordenis Ugas. He is planning to turn his attention to politics and is planning to run for the President of the Philippines.

The Icon In The Philippines, Manny Pacquiao

Manny Pacquiao is an icon in his nation and is the only boxer to win world titles in 8 divisions. He has officially announced his retirement at an age of 42 and plans to focus on politics, entirely.

He uploaded a video of 14mins and 20 seconds where he stated that he was announcing his retirement from boxing. This was uploaded on Tuesday.

He thanked all the fans for being so great and for giving him beautiful memories in this great sport. This was a hard decision for him but he was at peace with it. He also encouraged people to chase their dreams and to work hard.

Manny Pacquiao served as a senator in the Philippines since 2016 and had announced his candidacy for president last week. He last fought in August when he ended a 2-year hiatus. He lost to WBA welterweight champion Yordenis Ugas in the pay-per-view fight.

The announcement was delivered by Manny Pacquiao at a press conference on Wednesday from the Philippines which brought an end to a legendary 26-year professional career that began in 1995. He was a 16-year-old who turned pro at 106 pounds.

The lightning-quick southpaw then took his talents to the US for the first time in 2001 when he joined forces with Hall of Fame trainer Freddie Roach. Manny Pacquiao upset Lehlo Ledwaba via sixth-round TKO for the IBF junior featherweight title as a late replacement in Las Vegas.

AAL Has Its Price Rating Increased By Raymond James