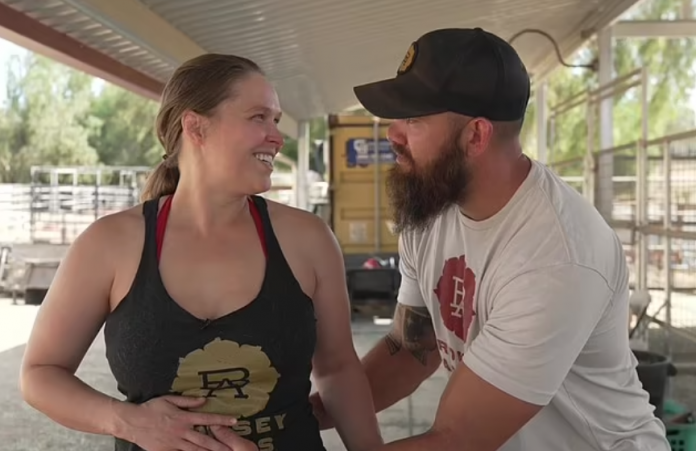 Ronda Rousey and Browne revealed that they were having a daughter last June.

The former WWE and UFC star, Ronda Rousey and her husband Travis Browne welcomed their first offspring into the world on Monday. Rousey gave birth to a beautiful daughter and was named La’akea Makalapuaokalanipō Browne. Browne was also a former UFC fighter.

Ronda Rousey Showing Off Her Baby

Ronda uploaded a picture of her baby and captioned it as La’akea Makalapuaokalanipō Browne with a heart emoji at the end. Her daughter’s hand was on her chest in that Instagram post.

Browne shared the same image with the caption, “Welcome to this world La’akea Makalapuaokalanipō Browne. You are so incredibly loved!”

The couple revealed that they were having a baby girl after announcing the pregnancy in April 2020.

Ronda Rousey broke into the world of MMA when she became a star in the UFC and earned the nickname “The Baddest Woman On The Planet”.

She had a 12 to 2 record in that time and was the Women’s Bantamweight champion.

Ronda Rousey debuted in WWE in 2018 at the Royal Rumble pay-per-view. This was after her UFC career. Her ring debut came at WrestleMania 34 when she teamed up with Kurt Angle to fight Triple H and Stephanie McMahon in a tag-team match.

Browne was a former UFC heavyweight fighter. The couple was seen together in 2015 and 2 years after they were first seen, they got married in Hawaii, where Browne was born.

How Much Does It Cost to Hire a Personal Injury Lawyer?

CDC’s new mask guidance as Delta variant and COVID-19 spread, plus a look at...

CIB Receives A “Hold” As Its Average Stock Rating

ABOUT US
The Union Journal provide you with the latest local and national news, sports, entertainment, finance, technology, and more
Contact us: [email protected].com
FOLLOW US
© Copyright 2019 - theunionjournal.com