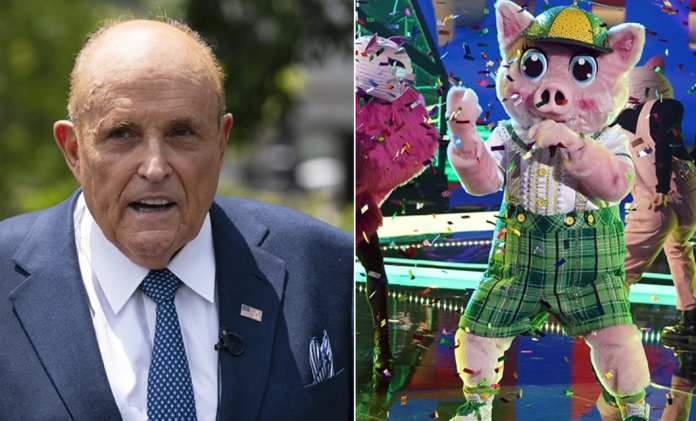 Rudy Giuliani, it appears has found a new gig, that of a masked singer. The former New York mayor, legal counsel to former President Trump, and an instigator in the January 6 riots is a competitor on Fox’s prime-time show, The Masked Singer, though the show is yet to go on air and is themed ‘The Good, The Bad, and The Cuddly.’

TMZ confirmed that Rudy Giuliani was a participant. His revelation led to two of the celebrity judges leaving the show immediately. Judges Robin Thicke and Ken Jeong staged an immediate walkout in protest the moment Rudy Giuliani revealed his identity.

The competition features celebrities who wear intricate costumes that fully cover their identity. They perform and sing for live viewers and a judges’ panel comprising famous people.

The panelists take the aid of clues in guessing the identity of each of the masked contestants even as the live audience vote for their chosen singer. One contestant, the least favorite of the show, is eliminated at the end of the episode, and they remove their mask to finally reveal their identity.

Rudy Giuliani First To Be Unmasked

Rudy Giuliani was the first to be unmasked at the recording of the show for the forthcoming season. Immediately, a couple of judges, Robin Thicke and Ken Jeong walked off in protest while the remaining two judges, Nicole Sherzinger and Jenny McCarthy stayed back to talk with Rudy Giuliani.

The Fox network has not released any statement and Rudy Giuliani has not responded to questions. Representatives of Robin Thicke and Ken Jeong also did not respond to the request for comments.

Rudy Giuliani isn’t the first controversial Republican politician to take the stage for the Masked Singer contest. Back in 2020, Sarah Palin, the former Governor of Alaska was unmasked as a cuddly Bear after her performance of Baby Got Back by rapper Sir Mix-A-Lot.

Giuliani has been the target of federal investigation into allegation that he has violated laws on foreign lobbying. He also led the efforts to overturn the 2020 Presidential elections results in favor of Trump. He has been suspended from his practice as an attorney in Washington, DC and New York.

When Calls The Heart Is up For Another Season!

Some Americans may be suffering financially greater than ever when the Christmas season gets underway with stimulus check owing to the soaring inflation. According to...