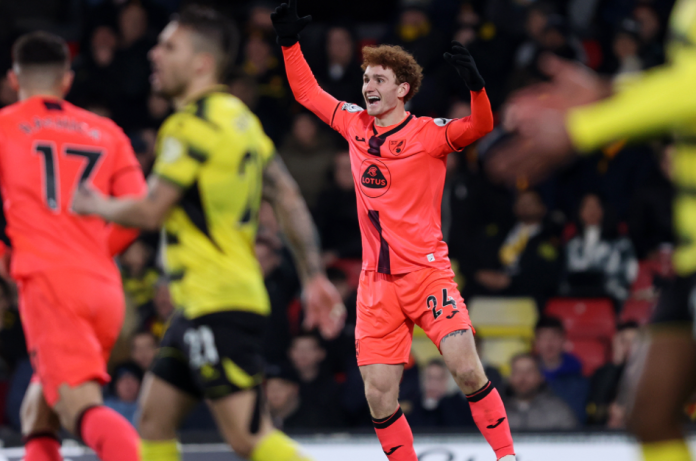 Josh Sargent scored his first PL goal to help Norwich City cruise past a helpless Watford. Norwich City has not moved out of the relegation zone.

Sargent became a dad for the first time this month, while Norwich City has enjoyed back-to-back wins and is now two points above the bottom three.

“It’s been a kind of a blur. To get your first goal and then your second after was pretty crazy,” said Sargent. “It was a big game for us so a great night overall.

“Obviously being in the relegation zone means every game is big for us, but to get a win against the team right in front of us is huge.”

Josh Sargent Was The Man For Norwich City

Sargent had a tough time in front of the net and had failed to find the net in 18 league games. However, he acrobatically hooked Teemu Pukki’s cross from behind him and saw it bounce in off the underside of the crossbar for Norwich’s opener.

He scored a thumping header and made it 2-0 for Norwich. The game was stopped previously because of a floodlight fault.

“After the first one I didn’t celebrate for my newborn baby so I knew the wife would be on my case. I thought I need to do it now!” he added.

“It’s been a crazy couple of weeks obviously but I’m very happy. It’s been amazing.”

Norwich rubbed salt in Watford’s wounds with a third goal late on – substitute Juraj Kucka poking past his own goalkeeper at the near post.

Watford was further hampered by Emmanuel Dennis’ sending off after the forward was shown a second yellow card by referee Mike Dean for a rash challenge on Max Aarons.

“No Evidence” That Recovered COVID-19 Patients Cannot Be Reinfected: WHO

Who are ISIS-K, the terrorist group claiming deadly Afghanistan attack?

Bankrupt Casa Bonita To Be Owned By The South Park Creators

You Need to Know this stock? bioAffinity Technologies, (BIAF)

bioAffinity Technologies, (BIAF) exchanged 1281604 shares on hands in most recent trading session and observed an average volume with 63.6K shares....

Are You looking For Hot Stock? Lyft, (LYFT)

Lyft, (LYFT) exchanged 297577 shares on hands in most recent trading session and observed an average volume with 15325.42K shares. The...

Johnson & Johnson (JNJ) acknowledged active focus on shares in the last trading session.The stock disclosed a change of -1.08% and its...

Allarity Therapeutics, (ALLR) acknowledged active focus on shares in the last trading session.The stock disclosed a change of -11.80% and its...