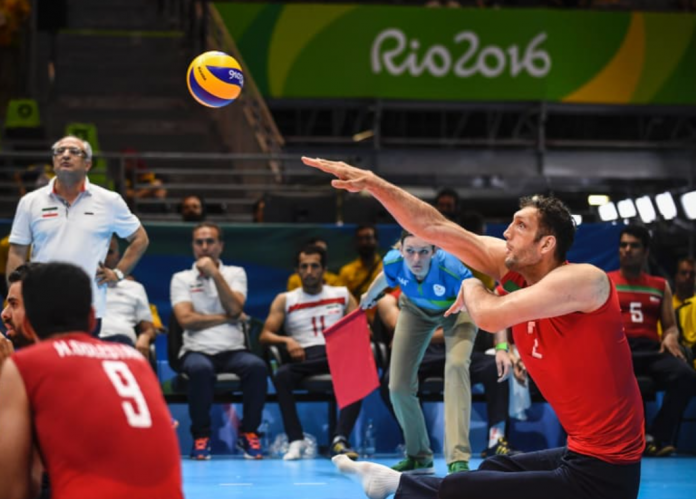 Morteza Mehrzad is participating in the Tokyo 2021 Paralympics. He is the star player of Iran’s volleyball team and the second tallest man on the planet.

Mortez Mehrzad’s sitting volleyball team will face Bosnia-Herzegovina in the semi-finals on Thursday.

Mehrzad towers over the average man and is an astonishing 246 centimeters or eight feet one inch tall. The standard door is 204 centimeters high and the gold medal-winning jump was 237 centimeters in the men’s high jump at the Tokyo Olympics 2021.

Mehrzad’s height is only second to Turkey’s Sultan Kösen, who stands at 251 centimeters or 8 feet 2.82 inches tall.

Paralympics Star Had A Tough Past

Growing up, Mehrzad had a tough childhood like many other individuals who are taller than 2 meters. He believes that sitting volleyball is the light that saved him from unending despair.

He had a few friends as a child because of his extremely tall stature.

Five years before the Rio Paralympics, in 2011, Iran’s national coach Hadi Rezaei was watching a television program at his home in Iran that spoke about people with rare physical impairments and astonishing talents.

Rezaei immediately got in touch with the television network about Mehrzad, who appeared on the program. Mehrzad had been diagnosed with acromegaly at a young age. Acromegaly is a condition that causes the body to produce too much growth hormone.

When Mehrzad was 16, he fell off a bike and fractured his pelvis. The trauma caused his right leg to stop growing. The limb is now 15 centimeters shorter than his left leg. He has to depend on a walking stick.

The Paralympics star, Mehrzad opened up saying that his condition made him feel lonely and depressed. He was terrified of stepping out of his house and was extremely conscious of his appearance. He said he could not see a happy future for himself. Sitting volleyball helped him out of his misery and gave him hope, a Paralympic gold medal and a bright future as an athlete.

Mehrzad has the amazing ability to block and deliver powerful spikes from a far greater height than his opponents. His talent helped Iran win a gold medal in the Rio Paralympics. He scored a staggering 28 points in the gold medal game against Iran’s fierce rivals Bosnia-Herzegovina.

While sitting on the court, Mehrzad has the highest recorded block reach of 1.96m, to go with the highest spike reach of 2.30m, which is a problem for other teams.

Prediction Of Fantasy Baseball Of This Year, 2022

The Last Duel: A Review On The Work Of Ridley Scott