Lottery players did not have luck on their side for some time now as the Powerball numbers were left without a winner on Saturday January 16th. On the flip side, this also means that the Powerball jackpot has surpassed the value of $700 Million. According to the officials of this Jackpot, the total estimated value currently stands at $730 Million as of the next drawing, that is on Wednesday.

But that is not all. Participants of the Mega Millions lottery will also be looking forward to some big drawings in the next game on Tuesday, January 19th.

Sources suggest that this is the longest stretch of time without a Powerball winner. Someone in New York won the last jackpot on September 16th, 2020. Since then, there have been 35 drawings of Powerball numbers but without a winner.

If Wednesday turns out to be a lucky day, someone might be able to bag $730 Million. Officials also suggest that the total value of the jackpot is currently the highest since March, 2019.

You Need to Know this stock? Carnival Corporation & plc (CCL)

Carnival Corporation & plc (CCL) observed an average volume with 53029.94K shares and exchanged 236758191 shares on hands in most recent trading...

You Need to Know this stock? Peloton Interactive, (PTON)

Peloton Interactive, (PTON) acknowledged active focus on shares in the last trading session.The stock disclosed a change of -1.70% and its... 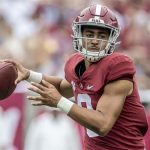 Bryce Young, the starting quarterback for Alabama and the current Heisman Trophy legend suffered a shoulder injury in the 1st half of the 49-26...