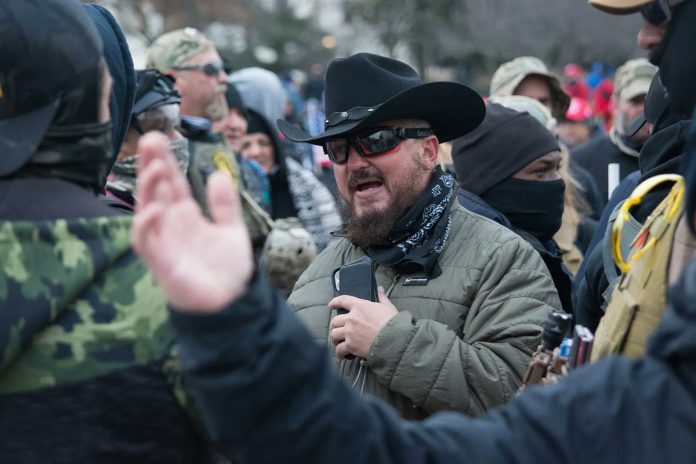 Stewart Rhodes, the founder of the militia group Oath Keepers had a heated exchange with prosecutors who used statements made by the self-styled leader of the group. Facing serious charges of seditious conspiracy, the militia leader, who likens his group to the American Revolution patriots, responded that the present situation was similar to one faced by the founding fathers in 1776.

Prosecutors quizzed him on his and the Oath Keepers’ role in the 2020 Presidential elections and the riots that followed in the Capitol, led and instigated by then-President Donald Trump. He vehemently denied any intention or plans to use the Oath Keepers to disrupt the election process or have his men prevent the certification of the results.

Federal prosecutor Kathryn Rakoczy referred to messages from the Oath Keepers leader to undercut his denial of the events on that day and the following days. Four days after the riots, Rhodes posted that if Trump could not prevent himself from being removed from office, the Oath Keepers should have come armed to Washington.

Rakoczy also posted another statement he posted on November 9, 2020, a week following the election. Rhodes said that they were in the same situation the founding fathers of the nation faced in March 1775.

He urged he followed that they had no option but to fight and said that they had to do it smartly while President Trump remained in charge as the Commander in Chief.

Prosecutor Rakoczy also revealed signal messages used by Rhodes in which he told the Oath Keepers that “We will have a QRF” on Jan. 6 as the situation demands it. He also shared group messages where the group sent messages of the routes to be used by the QRF to enter Washington.

Rakoczy said that he would have to take responsibility for what others did as he was in charge during that period.

Zelensky Takes Center Stage In Congress: Desperate For Help As The Horror Escalates

TreDavious White From Buffalo Bills has Torn His ACL, Will Be Out For The...