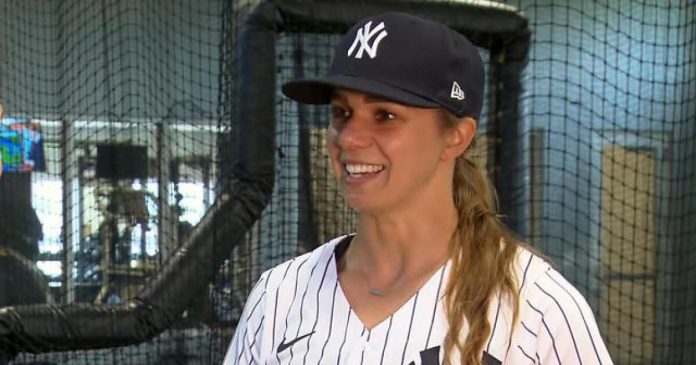 After being named to one of the NY Yankees’ affiliate teams, Rachel Balkovec is all set to be the first woman manager in Minor League Baseball.

Rachel Balkovec will be the manager of the Tarpons, who play in the Low-A level of the minor leagues. Balkovec, 34, was a hitting instructor with the Yankees’ rookie-level Florida Complex League team.

Rachel Balkovec Was Hired By The Yankees

She was the first female to work as a full-time hitting instructor for a Major League Baseball team. With the San Francisco Giants in 2020, Alyssa Naken became the first female big league coach.

Balkovec first worked in pro baseball in 2012, on a temporary contract with the Cardinals’ minor league affiliate in Johnson City, Tennessee, when she was named the Appalachian League’s strength coach of the year. She was the Cardinals’ minor-league conditioning and strength coordinator in 2014 and 2015, making her the first woman in major-league baseball to hold a full-time role in that sector.

She was the Latin American conditioning and strength coordinator for the Houston Astros in 2016. She was hired as the strength and conditioning coach for the Astros’ Class AA Corpus Christi Hooks two years later.

Rachel Balkovec played catcher for the Creighton and University of New Mexico softball teams. She graduated from Louisiana State University with a master’s in kinesiology. She left the Astros in 2018 to attend Vrije University, Netherlands, for her second master’s degree in human movement sciences. She also worked as an assistant hitting coach for the country’s baseball and softball programs during her time there.

Rachel Balkovec will be in charge of directing the team’s coaches, players, and staff. She will also be assisting players in their development and making in-game tactical choices, including managing a pitching staff. This newest step might be the first of many in her career.

Chelsea Owner, Roman Abramovich, Gives Up Stewardship And Care Of The Club