The inflation drama that continues to make daily life more expensive comes with an impossible Catch-22. Average people — particularly low-income families — need financial assistance to cope with rising prices, but a fresh round of stimulus check payments would only make inflation worse by injecting more money into the economy.

Despite early-year discussions, it has been clear for months that the direct payments and expanded tax credits from the pandemic years are over. But some states are finding a middle ground with stimulus check payments that are much smaller and more narrowly targeted.

Millions of Americans might be eligible for stimulus check payments this summer and fall, depending on who they are and where they live.

Stimulus Check News: Here’s What You Need To Know

In March, several Democratic representatives proposed the Gas Rebate Act of 2022. The act would give eligible taxpayers $100 per month — eligibility would be based on income — along with $100 per month per eligible dependent, to help them cope with rising fuel costs.

The act would have to work its way through Congress to become law, but it hasn’t even passed preliminary steps at the committee level yet.

Beyond that, the only other stimulus payments are coming from the following states:

Eligible Colorado residents will receive checks of $400 or $800, depending on their filing status, but they could get even more if the state ends up earning higher revenue. Payments will arrive later in the summer.

Delaware’s governor approved one-time payments of up to $300 for qualifying residents. Most payments were distributed by May 31. If you didn’t receive one but believe you’re eligible, check your status with the state Division of Revenue.

Eligible Georgians began receiving rebate payments of between $250 and $500 in May. Amounts are based on filing status, and partial-year residents are eligible for reduced payments.

Hawaii approved payments of $300 for taxpayers earning up to $100,000 a year and their dependents, meaning a family of four could receive as much as $1,200. Those who earn $100,000 or more are eligible for up to $100. The state will begin processing payments in late August.

Eligible Idahoans will receive either $75 or 12% of their 2020 state taxes through a rebate program that the state approved in February. Payments began in March and will continue throughout 2022.

Crypto roadblock: Why the attempt to alter the crypto rule in the infrastructure bill...

Tricks and tips on becoming a very successful Forex trader

Johnny Depp’s Fans Shower Him With Love On His Birthday 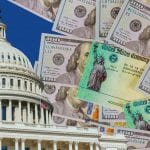 Stimulus Check News: Is More Relief On The Way?

Stimulus checks in 2020 and 2021 prevented the U.S. from entering a recession or maybe even a depression. Though due to the inflow in...