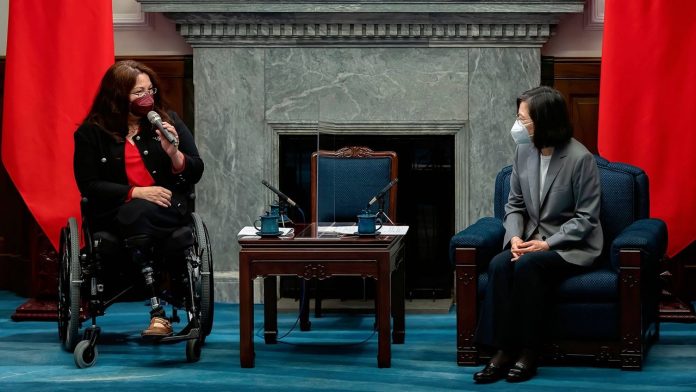 Tammy Duckworth is one of the biggest names in the American political circuit. He is ranked highly and has had numerous significant contributions in the past. Tammy is currently serving as a Senate Representative from the state of Illinois. Duckworth has surprised everybody with his sudden Taiwan Visit. A team of delegates headed by Duckworth arrived at Taipei recently totally unannounced.

The Taiwan ministry stated that they had no prior information about the fact that a team from the United States would be visiting them. Xavier Chang is the spokesperson of the Taiwan President. He stated that the team from the United States will be engaged in a meeting with the President of Taiwan, Tsai Ing-wen. The topic for discussions is expected to revolve around topics like cooperation between economy and trade, security of the regions, etc.

The meeting is also expected to strengthen the relations between America and Taiwan. The team is also scheduled to meet Su Tseng-chang and Wang Mei-Hua. They hold the respected positions of Premier and the Economic Affairs Minister respectively. Wednesday is cited as the last day of the team’s Taiwan Visit. Let us learn more about the story in detail below.

The foreign ministry of Taiwan was taken aback when Tommy Duckworth appeared for his Taiwan Visit recently. The relationship between America and Taiwan has always been great. Both the countries have been allies and stood by each other’s side whenever needed.

Joe Biden has recently voiced his support for Taiwan. In a recent meeting, he stated that the United States would deploy military forces in Taiwan if China tried to take over the country forcefully. Most people are speculating whether the Taiwan Visit had other secretive significance or not.

New England Patriots Finding Their Consistency Back While Attacking: Can See Themselves Through The...

‘This was a momentous election for the cannabis industry:’ Weedmaps