Home Entertainment Unrecognizable Tori Spelling Seen At Her Night Out 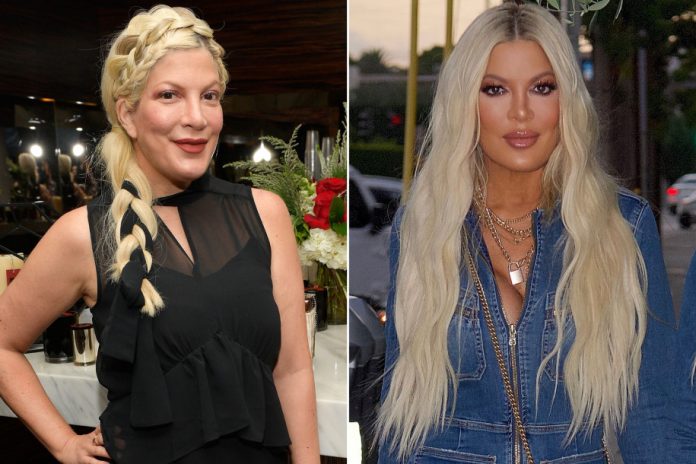 Actress Tori Spelling looked completely unrecognizable while she was seen celebrating the wrap of “Messyness” with Snookie, Laura Rugetti, and other friends.

Tori Spelling Uploaded A Picture On Instagram, Sitting Beside Snookie

Tori Spelling posted a picture of herself on Instagram, sitting next to the Jersey Shore star. Fans flooded the comment section with their views on how different she looks from her Beverly Hill days.

Tori hung out with Snookie in LA and people chimed in that maybe surgery played a role in the way of her looks.

Snookie had also undergone surgery and posted the same picture that Tori Spelling had put on her Instagram.

Tori captioned her picture, Messy Bestie, and stated that they were the duo that people never thought they needed. She called Snookie her twin flame and loved the way they empowered each other to be themselves and be authentic in that way.

As usual, many people slandered Spelling on the way she looked but were countered by the sane people, who had her back.

The supporters stated that Tori looked amazing and that the way she spends her money is her own personal affair. Tori was seen matching Laura Rugetti with denim jumpsuits. Laura is her personal hairstylist. People flooded the comments with how she looked younger every year and that she was fabulous.

Tori Spelling opened up about her work in 2019 and stated that she had her nose and breasts done. She feels bad that people think she had done more but that was it.

People kept talking about her plastic surgery since she was 17 but her dad had her back and said that the comments will die down with time. In reality, the comments did not die down and stayed with her entire career.