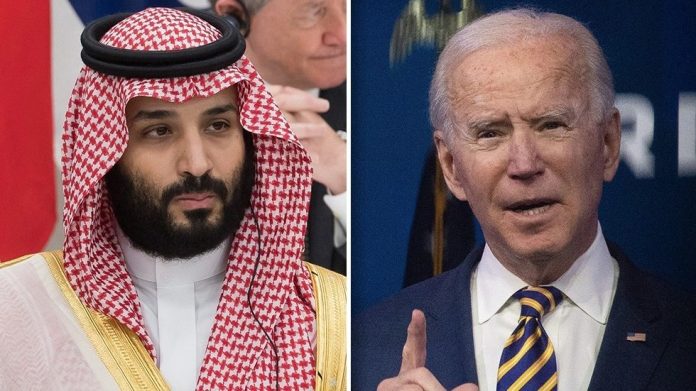 President Biden is to meet the Saudi Crown prince named by US intelligence for sanctioning the live dismembering of dissident Washington Post journalist Jamal Khashoggi parroting Trump’s contention that they are a ‘tremendous purchaser of not only military purchaser but other things,’ implying that it absolves them of all crimes.

US officials too changed their tone preparing the ground for the US Saudi meeting by recognizing the role played by the crown prince in extending a ceasefire in Yemen, a nation it has almost bombed to oblivion.

Karine Jean-Pierre, the press secretary at the White House said that the crown prince deserved credit for his role in the truce extension in Yemen.

The highly controversial US Saudi meeting comes after Biden had earlier said that Saudi should be made a pariah nation during his election campaign.

Bin Salman has been an international ‘pariah’ ever since he sanctioned the killing and dismembering of a Washington Post journalist by Saudi agents inside their consulate in Turkey. He was dismembered with a bone saw.

President Biden is desperately trying to stem the price of gasoline back home and for that, he is willing to bend backward to accommodate even rogue leaders such as the Saudi crown prince. Jean-Pierre admitted that his engagements with the Saudi leader were to further American interests, implying that it overrides all other issues.

In line with the US Saudi meeting announcement, OPEC countries have decided to increase their oil production by 200,000 barrels in July and August, a move welcomed with open arms by the White House.

The widow of murdered journalist Jamal Khashoggi has urged Joe Biden to press the case of political prisoners in Saudi Arabia during the US Saudi meeting.

The US Saudi meeting and Biden’s rumored plan to meet the disgraced crown prince even after the US President had promised to ostracize the Saudis for human rights abuses have surprised Saudi dissidents. Saudi continues to be one of the most repressive regimes on earth and has been the home ground of most of the terrorists responsible for the 9/11 attack.