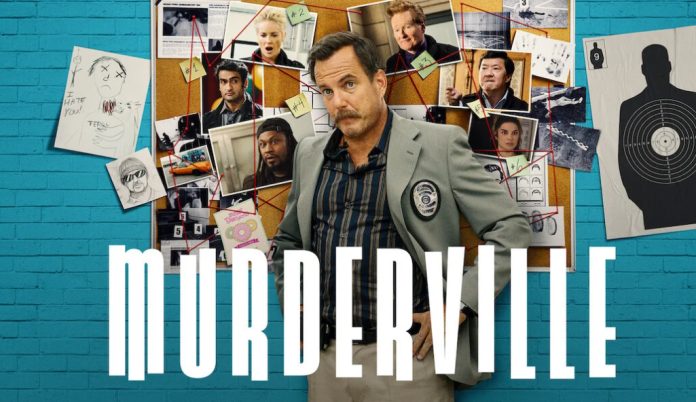 The most recent murder mystery from Netflix comes with an unusual twist. The supporting investigators in Murderville have to constantly improvise their methods to catch the killer. A murder mystery in an old-fashioned mold is always a tried and tested format and destined to succeed. From Knives Out, Only Murder In The Building, to the latest The Afterparty on Apple TV, murder mysteries have always caught our fancy.

Murderville is the latest from the stables of Netflix in the crime drama genre and is sure to keep you on the edge of your seat. But the series comes with a distinct flavor.

The cast will be led by Will Arnett of  Arrested Development. He is also its executive producer. Each episode showcases a fresh new murder for the guys from homicide and has a fresh celebrity partnering them each time.

The Stars Are Not Given A Script In Murderville

In an unusual twist, the stars were not given any script. The rundown of Murderville states that while they all assist Terry in deciphering the clues, they must improvise throughout the case. The killer is named at the end by the celebrities alone.

We got to see a wildly brilliant trailer in Murderville that is a reflection of the wild outline of the forthcoming series. Arnett sets up the celebrities for some wildly funny improvised scenes. There is Ken Jeong pretending to be dead in one crime scene, while Sharon Stone is a German pathologist in another.

Murderville is wild and fun and is sure to be funny while having the tense anticipation of a whodunit. The Netflix is based on Murder In Successville, a BBC 3 series, and a BAFTA winner. Arnett describes Murderville as Law & Order, but basically without the script.

Without any script in hand, the guests don’t get to know what they could be facing next. They improvise their way along with Arnett. The stars name the murderer themselves at the end of each episode. They could be right. Or they could be mistaken. We only get to know at the fag end of the episode. As Netflix states, while solving crime is tough, improvised comedy is way tougher.

6 Months Of Unemployment Benefits Was Asked By Biden, But He Got 5

Baron Zemo, An Important Villain From The MCU Franchise