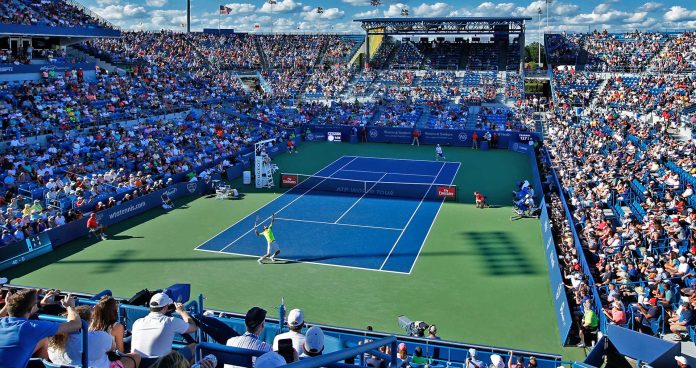 Cincinnati Open is one of the most prestigious tournaments in the entire tennis world. It is from this tournament that a lot of popular tennis stars have emerged as legends. However, the recent edition of the tournament has been plagued by huge controversy. The incident happened in the middle of a qualifying match between Anna Kalinskaya and Anastasia Potapova.

One of the tennis stars complained to the umpire about a woman that had a Ukrainian flag draped around her body. She requested the umpires to get the woman to drop the flag from her body. The umpires initially asked the spectator to remove the flag. However, she was adamant about doing the same. After a little while, the securities were called in to have the situation under control. The woman was reluctant to go away when the security threatened her to call the police.

They told the fan that it was not a nice gesture to bring a flag inside the stadium. The woman instantly replied saying that invading a country out of nowhere was no politeness either. After a fairly long fight, the woman was finally evicted from the arena. The officials of the Cincinnati Open stated that there were no political angles involved with the incident. Let us learn more about the story in detail below.

The Cincinnati Open has been hit by the latest wave of tension growing between Russia and Ukraine. A fan named Lola was spotted draped in a Ukrainian flag. After being complained about by one of the players, she had a long argument with the officials before leaving the stadium. The officials defended their stand stating that the flag was too big to be allowed inside the arena.

The footage of the incident shows that the fan in question did not create any fuss. She was spotted with the flag around her, quietly enjoying the qualifying match of the Cincinnati Open. It will be interesting to know what happens next.

Another Stimulus Check In Sight For Kentucky Taxpayers In 2023