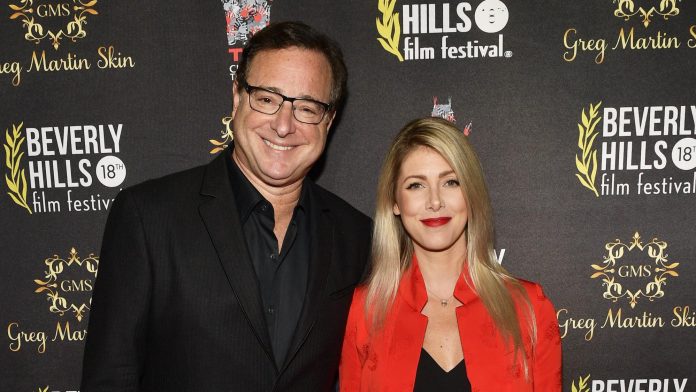 Bob Saget‘s premature death surprised everyone, especially his wife Kelly Rizzo, who has been upset since the actor’s death. Following his burial on Friday, Rizzo turned to Instagram to pay poignant homage to her late husband, along with a touching snapshot of the two cuddling up for a selfie. Kelly paid tribute to Saget in a long article.

Kelly Rizzo talked fondly of her late husband, describing him as a “force” and praising his personality for being the nicest and most supportive person to loved ones and strangers alike. She also noted that everyone who loved Bob was worried about her well-being following his untimely death, and she is eternally thankful for it.

Kelly Rizzo also begged Bob’s fans and well-wishers to keep the Full House actor’s spirit alive in her heartbreaking tribute. She also stated that she intends to continue to commemorate him by sharing his message of love and laughter in the future.

Kelly Rizzo also discussed how important the Scleroderma Research Foundation was to him. She went on to say that if he kept working on it, she would make him proud. Kelly ended her heartbreaking tribute with a nice message for her late husband, stating she loves him and will always miss him.

In 2015, the pair met on social media. They were together for three years. They married in October of 2018.

The message comes only one day after approximately a hundred of Saget’s closest ones gathered on Friday for a private memorial ceremony. John Stamos, Lori Loughlin, Mary Kate Olsen, and Ashley Olsen were among the “Full House” co-stars who paid their respects to the late comedian.

Shakira Gets Poached By Wild Boars In Park: Run Off With Keys And Phone