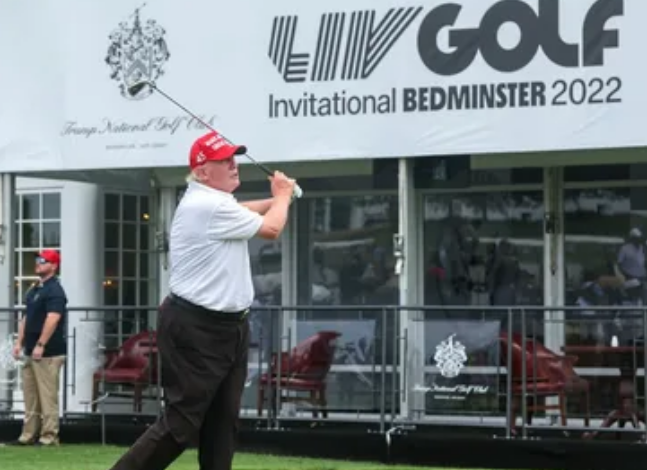 Charles Barkley, a member of the Basketball Hall of Fame, stated Thursday that he has not yet received an official offer to work as a broadcaster for LIV Golf. Barkley has gained enormous fame in his post-playing days through his work as a TNT commentator and a corporate pitchman.

Before competing in a pro-am event at Trump National Golf Club Bedminster, the third stop on the LIV Tour, Barkley spoke with ESPN. He claimed that it is unfair to disregard TNT.

Barkley doesn’t seem to be faced with a decision right now. Despite meeting with LIV Golf CEO Greg Norman and indicating his openness to receiving an offer to join LIV Golf’s broadcasting team, he claimed on Thursday that no such offer has yet been made.

On Thursday, former president Donald Trump took part in the pro-am at his golf course in northern New Jersey.

The family members of 9/11 victims, who held a news conference earlier this week and plan to conduct another one Friday, have harshly criticized the golf course’s proximity to the site of the World Trade Center attacks on September 11, 2001.

Barkley extended his sympathies to the families of 9/11 and claimed it was perhaps the darkest day in our nation’s history.

No Criticism Directed Towards LIV Golf

The golfers are the target of the public’s ire, according to Barkley, who questioned why more criticism hasn’t been directed toward businesses like LIV Golf that receive funding from the Public Investment Fund Saudi Arabia.

Everyone is inventing terminology like “dirty money” and “sports washing.” Barkley remarked, that if someone plays sports, they all receive funding from places one might love or respect. He doesn’t wish to act hypocritically. These men [LIV golfers] are looking to support themselves. However, it seems like everyone is just trying to play the moral card. He also thought that selective outrage exists.

LIV announced on Wednesday that it would hold 14 events in 2023, including 48 golfers vying for an unprecedented $405 million in prize money. Through its LIV Golf International Series, which was started this year with a $300 million investment in the Asian Tour, LIV Golf will also hold additional tournaments in 2023.