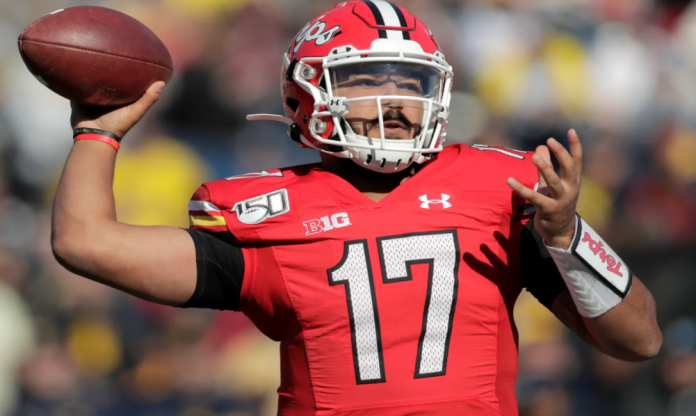 Maryland ran away with the win in the 4th quarter of the new season.

Maryland Football team was up 23 to 21 and had 8 minutes on the clock against West Virginia. The Mountaineers were huddled in the endzone to take a late lead in the game but QB Jarret Doege swung the ball into the endzone, which was caught by Bennett and later intercepted. This gave possession to the Terps while being ahead.

Taulia Tagovailoa inched the team down the field 20yds in 4 plays to Maryland’s 40-yard line. On 3rd down with 5yds to go, Tagovailoa stepped back and swung a pass to the left where Rakim Jarrett caught the ball and raced into the endzone for a 60-yard touchdown.

Maryland Held On The Lead

Coach Locksley was immensely proud of his offense and defense who made the respective plays when it was required.

That was the exact area the team had not worked upon.

College Park was completely electric and the fans filled the stadium for the seasonal football game. This was the first in 600 days and the home team did not fail to impress the fans.

West Virginia did its best to come back into the game but the defense held its ground. Tarheeb Still and Holt did their jobs perfectly and stunted their drives and forced the first punt of the match.

Maryland was extremely good and went back to work as soon as they got the possession back. Tagovailoa launched the ball to Okonkwo, who ran for the touchdown. The lead kept extending over West Virginia.

Maryland ended the first quarter with a score, every time they drove forwards and Tagovailoa ended the first, 9-for-11 passing for 166 yards and won 2 touchdowns.

The defenders made a great impact as Still and Cross ended their games with 7 tackles each. Taulia Tagovailoa had one of the best games of his career.