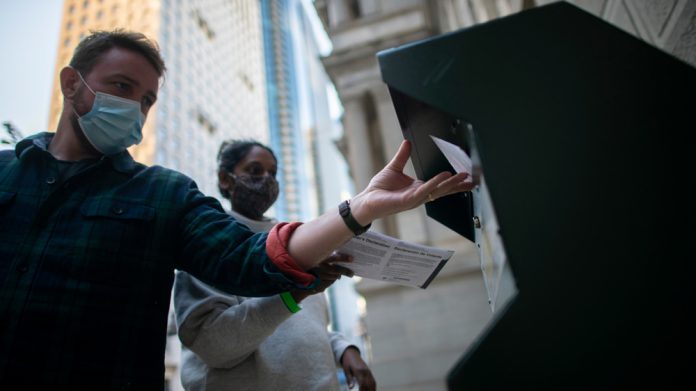 The state’s wide mail-in voting law was declared illegal by a Pennsylvania court. As a result, state Republicans who challenged the legislation after former President Donald Trump erroneously claimed that mail-in voting resulted in election fraud won a temporary victory.

The two-year-old law was overturned by a majority of the Pennsylvania court’s five-judge panel. Governor Tom Wolf (D) and Attorney General Josh Shapiro (D) of Pennsylvania promised a quick appeal, slamming the court’s decision as based on twisted logic and flawed reasoning.

With bipartisan support, the state’s Republican-controlled legislature enacted a measure allowing no-excuse mail-in voting for all voters in 2019. Absentee ballots were previously available to Pennsylvania voters who met specific requirements.

During the epidemic, more than 2.6 million Pennsylvania voters, out of a total of 6.9 million, submitted mail-in or absentee ballots.

Any modifications to the voting law, the court decided Friday, would necessitate a constitutional amendment.

Some Republicans in the state echoed Trump’s unfounded accusations of massive voter fraud and criticism of mail-in voting in filing the legal challenge.

Wolf pointed to the GOP’s turnaround in a statement to The Washington Post.

In his remarks, Shapiro emphasized that the court’s decision will have no direct impact on the upcoming elections. This year, the state holds both a gubernatorial and a U.S. Senate election.

Three Republicans and two Democrats made up the state court panel that deemed the measure unlawful. The three Republicans sided with a group of state legislators who challenged the statute in the wake of Trump’s bogus claims of electoral fraud. Two Democrats voted against the bill.

Trump, whose unsubstantiated claims of rampant voter fraud have been propagated by some Pennsylvania Republicans, applauded the law’s repeal on Friday.

What Is The Meaning Of Convalescent Plasma? All You Need To Know About This...