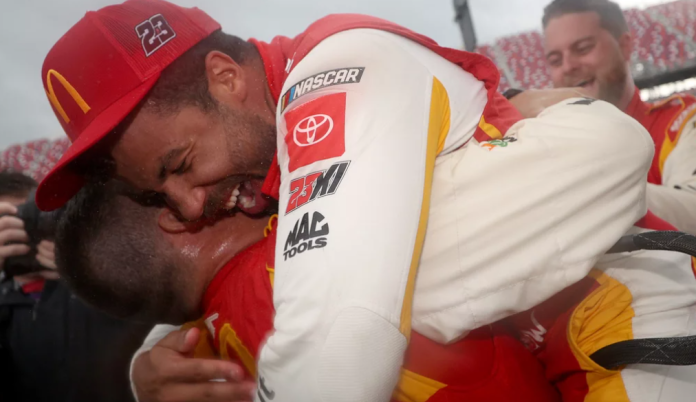 Bubba Wallace drove for a new team, which is co-owned by the greatest basketballer and is backed by Toyota and Joe Gibbs Racing.

Wallace celebrated the win by crying and jumping around like a kid. He also dropped tons of cuss words on live national television.

Bubba Wallace stated that the win was for all the kids who wanted an opportunity, in whatever field they desired and to be the best at what they wanted to do. He added that they might be obstructed by blocks but they should always stay true to the main goal and not let any nonsense get to them. There were plenty of times that he wanted to give up his dreams but he was luckily surrounded by the right people who motivated him.

NASCAR had called off the race with 71 laps remaining amidst looming darkness.

Bubba Wallace received congratulatory tweets as well as some harsh comments on Twitter but the thing is, he does not care.

He has no interest in the hater’s opinions about the win that he and his team has gathered at the end of a weather-delayed Monday afternoon Talladega showdown.

Bubba Wallace is a grown man now and does not care about the hateful comments. He has been engaged recently and is only 4 days away from his 28th birthday.

Jacob Anthony Chansley, One Of The Prominent Arrestees For Insurgency

2021 World Juniors Were a Success for Germany

Steve Bannon To Be Held In Contempt Of Congress

In an interesting turn of events, nine House Republicans voted to hold Steve Bannon in contempt of Congress- as they sided with the Democrats....

President Joe Biden has publicly admitted that he doesn’t seem to have any immediate solution to the rising gas prices- which he mentioned during...

Believe it or not, it was recently revealed that Kim Kardashian’s 2018 Met Gala look helped to solve the mysterious theft of a looted...

Kanye West has legally officially changed his name as he also debuted a new look that has shocked many fans…but not as much as...

Zendaya and Timothée Chalamet are showing everyone just why they are BFF goals in their latest interview with Good Morning America.