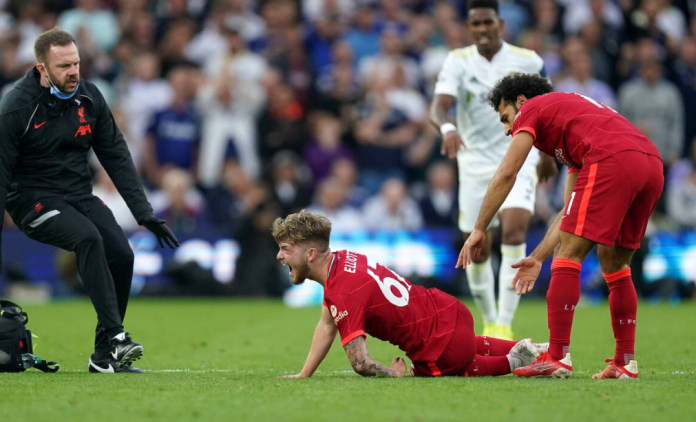 Liverpool received an injury blow after Harvey Elliott was severely hurt during their dominating 3-0 Premier League win against Leeds United on Sunday. The club confirmed that he will have to undergo surgery.

The game was stopped a little before the hour when Elliott was accidentally hurt in a challenge by Leeds player Pascal Struijk.

Jurgen Klopp said post-game that he had been informed of Elliott’s dislocated ankle.

The Current Situation Of Harvey Elliott

Harvey Elliott is currently in hospital with a bad ankle injury. It looked like it was dislocated and the medical department put it back.

It is a severe injury for a budding 18-year-old and the club is worried for him.

The team had a good rhythm going but Harvey’s injury gave the whole team a shock and disrupted their rhythm. They played their best against Leeds.

Klopp said that he spoke to the boy about their performance and his observations but Harvey’s situation overshadowed it all.

The club confirmed in a statement on Sunday evening that he will require immediate surgery.

Elliott is required to undergo surgery in the coming days and the club will offer a further update on his situation in due course.

Harvey Elliott, his family, and Liverpool FC publicly declared their gratitude towards the paramedics and all the staff at Leeds General Infirmary for the top-quality care and treatment given.

The 18-year-old was about to be substituted for Jordan Henderson when he was severely injured.

The Liverpool physios were on the pitch even before referee Craig Pawson could stop play, while TV pictures showed Mohamed Salah visibly disturbed by the injury and Klopp talking about the severity of the challenge.

Pawson sent off Struijk for the incident right before Elliott departed on a stretcher.

Sources reported to ESPN that Pawson spoke to his fourth official Andy Madley, who was close to the incident, before choosing to dismiss Struijk for the intensity of the challenge and endangering the safety of their opponent.

Leeds owner Marcelo Bielsa said postmatch that he regrets what happened and he wishes it did not happen. For that to happen to any player is saddening. For a young promising player playing at a high level even more.

Johnny Depp Has Named His Beaches After His Kids

Basics of Fixed Deposits – Everything you should know about it

Kevin De Bruyne's double strike was enough to help Manchester City see off Club America 2-1 in Houston on Wednesday as Pep Guardiola made...

The USWNT Wins Another Title

The USWNT won its ninth regional championship on Monday — and, after years of fighting for equal pay, finally reaped the financial rewards. The CONCACAF...

Chelsea continued their pre-season preparations with a 5-3 penalty shootout loss to MLS side Charlotte FC, following a 1-1 draw across 90 minutes in...

Miranda Lambert gave her husband, Brendan McLoughlin, a big fat kiss while on a road trip with friends. “Meet me in Montana forever 💛🏔,” the...

Katharine McPhee passionately kissed — and climbed all over — her husband, David Foster, in a steamy Instagram post-Tuesday. “Poor guy,” the “American Idol” alum...